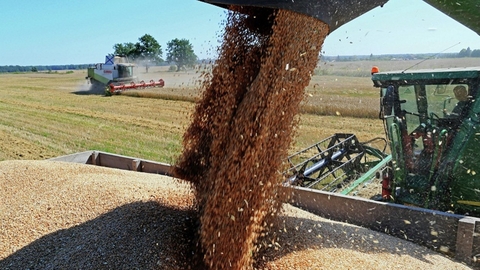 The price per ton of wheat with a 12.5-interest content of protein decreased at the end of last week on $1 compared to the previous week to $194 FOB in Novorossiysk, said ICARUS.

According SovEcon, the price of this class of wheat of new crop with delivery in July remained at the level of $196 per tonne FOB, the price of barley was down $1 to $167,5 per tonne FOB. The ruble rose against the US dollar by two percent last week.

"The market continues to closely monitor the weather in the black sea region. Hot and dry weather continues to threaten new harvest, sometimes the plants are in a depressed condition, and low moisture reserves to create the preconditions of yield reduction. In the coming weeks is expected to current weather conditions", - said in the review SovEcon.

In the Krasnodar region started harvesting of winter crops, gross harvest made up of 125,000 tonnes of wheat with an average yield of 66.8 tons per hectare, 5.2 hundredweight higher than last year.

Hot weather affects the moisture content of the soil and the dynamics of development of sugar beet, Soyuzrossakhar said. The index of white sugar IKAR for the South of Russia has increased for the week to 27.80 rubles per kilogram from 25.80 rubles, or up to $438,55 per ton from $399,20.

Average sunflower prices fell by 50 roubles to 18.975 rubles per ton. Prices of crude oil in the week continued to strengthen, reaching 42.925 rubles per ton, or 75 rubles more than the previous week. Export prices of oil rose $20 to $700 per ton