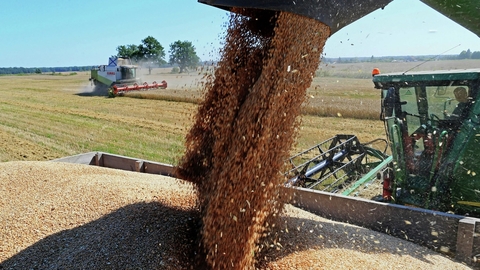 As reported "Interfax" the General Director IKAR Dmitry Rylko, the new forecast is 79.3 million tons against a previous 80 million tons.

"The main reason is hot weather in the South, where drought strongly "walked" across the crops," he said.

Earlier, IKAR has lowered the forecast of wheat harvest in this year with 80.5 million to 80 million tons.

Rylko said that will be reduced and the overall grain harvest, which has reached 124.7 million tons.

However, as stressed by the head of the center Igor Pavensky, as the General grain harvest and the wheat harvest will be the second-largest result after record crop production in 2017 (135.5 million tonnes).

"Manufacturers continue to increase the acreage under oil, reducing the area under spring grain crops", - he said.

According to Pavensky, the negative effect on the crop was also affected by hot and dry weather in June, especially in the Stavropol Krai and the Volga region. A starting yield of winter cereals in the North Caucasus district were below last year's forecast of collection decreased by 0.3 million tonnes to 12.3 million tonnes.

In this case in the southern district, in contrast, the starting yield is significantly higher than last year. The forecast crop is raised 0.1 million tons to 34.8 million tons, which is the second highest for the region since the record in 2017.

In the Central district forecast of grain harvest reduced by 0.4 million tons to 31.4 million tons in connection with a reduction of the forecast of sowing areas of spring crops. "But he still remains colorectum, second only to the level of 2017," - said the expert.

The agriculture Ministry maintains its forecast for the grain harvest of 118 million tonnes, including 75 million tons of wheat.

Последние новости
10:03 "News": experts predict a rise in prices of meat and milk in Russia
09:04 The President of the NRA of the Roots of bizdev: agricultural insurance with state support in 2019 covered 62 regions in all Federal districts of the Russian Federation
08:02 CLAAS: PROSPECTS OF THE RUSSIAN MARKET OF AGRICULTURAL MACHINERY
17:04 In 2019, Russia increased the harvest of potatoes
16:06 Miratorg confirmed the full compliance of the leather industry to the international standards
15:00 AS YOU SOW, SO SHALL YOU REAP: WE ARE LOOKING FOR VEGETABLE SEEDS FOR GOOD HARVESTS
14:03 Why it is important to digitize field boundaries
13:08 Quik-Knect™ for compact tractors received the award AE50 2020
12:34 How to cope with threat to food security of Russia
12:04 Russia: stocks of wheat from farmers has become even more about last season
11:56 New hybrid corn KSS 5290
11:07 "Rosgosstrakh" in Stavropol region paid 500 thousand rubles to the agricultural enterprise for the elite sheep, imported from Australia
10:01 Original heading: the agricultural sector relies on the continuity of state policy in the industry
09:01 Production of agricultural tractors in Russia has increased 6 times since 2013
08:01 Agroeksport in stagnation. The decrease in the shipments of grain is not allowed to increase the total export of agricultural products
All news