Wednesday, 31 July 2019
Belarusian farmers harvested more than 3 million tons of grain
Belarusian agrarians as of July 30, harvested about 3 million 100 thousand tons of grain, BelTA informs with reference to the operational information of the Ministry of agriculture and food. 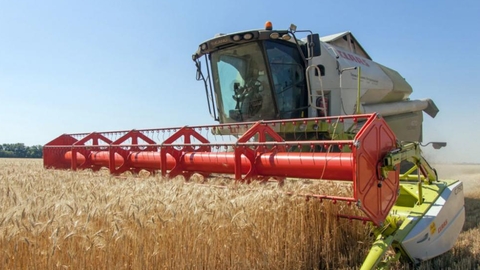 Grains and legumes (without maize, buckwheat and millet) removed more than 945 thousand hectares, accounting for 43.7% of the total harvesting area. The leaders of the Brest region. Here removed almost 75% of the area, farmers put in the bins more than 922 tonnes of grain. The pace of the harvesting campaign in the region higher than last year. By the way, yields too - 36,6 t/ha as against 29.7 t/ha in 2018.

The three leaders of the harvesting campaign in Gomel oblast. Here is the plan for cleaning of grain and leguminous is almost 47%, output of grain amounted to 356 thousand tons in Spite of the fact that the yield in comparison with the previous year is somewhat higher (2.1 t/ha), the figure is the lowest in the Republic of 22.9 kg/ha.

Just this year, under grain and leguminous crops (excluding maize, buckwheat and millet) designated 2 million 162 thousand hectares. the Plan of grain deliveries to the expense of the state order amounts to 815 thousand tons On 30 July this task was performed in 32% (261 kt).

Continues in farms and harvesting of malting barley. In General, under this culture have been given a little more than 48 thousand hectares have Already been harvested 21.4 thousand ha or 44.4%. Produced with over 75 thousand tons, the average yield of 35.1 t/ha.

At the expense of the state order is planned to supply 84,2 thousand tons of malting barley. According to the July 30, this task is made almost 8%.