Thursday, 18 June 2020
In the first half of the season, the quotas for grain export will not be
The government will determine the categories of goods for which it is impossible to apply non-Declaration 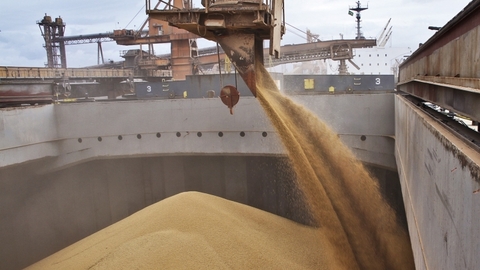 The agriculture Ministry has no plans to limit grain exports in the first half of the 2020/21 crop year, according to Reuters. "It is expected that the first half of the season has no restrictions on the export of grain, and the second half establishes a quantitative limitation due to the need to ensure the domestic market. The Ministry plans to improve and apply this measure in the future," — said the Agency at the request of the Agency.

In particular, the Ministry of agriculture developed a draft Federal law, according to which the government can receive the powers to determine the categories of goods for which it is impossible incomplete customs Declaration to apply. Such changes are envisaged in case the declarant at the time of filing at the customs has accurate information about the products. However, the applicant will be required to provide the missing information about the products "in a shorter timeframe" after their release. The planned date for the entry of the law into force to December 2020, from the data of the Federal portal of projects of normative legal acts.

In this year of incomplete customs Declaration was used in the export of grain under the quota, and some traders they were issued "in reserve", not having a chartered cargo, while other companies are unable to declare the grain on the already loaded ships due to the fact that the quota was set too fast. At the end of may it became knownthat the Ministry of agriculture plans to propose changes in the law, to avoid manipulation of grain export under the quota. The Ministry intends to continue to use quotas to ensure food security of the country, but now it is expected to take into account the sample quotas according to actual shipments.

The General Director of the analytical company "Prozerno" Vladimir Petrichenko said earlier "the Agroinvestor" that the only way to make the export transparent — do not introduce a quota as a "vicious and counterproductive" tool. "The Ministry of agriculture entered according to the old principle of Komsomol: first artificially created problem, then heroically solve it", commented he. The President of the Russian grain Union (RGU) Arkady Zlochevsky noted that to cancel the non-Declaration you had before, and not at the end of the season.

Head of the analytical center of "Rusagrotrans" Igor Pavensky calls the project of the Federal law the right measure: if there will be quota, will remain the possibility of incomplete Declaration, then the market will be in an unresponsive state, writes "Rossiyskaya Gazeta". Eliminating this mechanism, we should consider fixing the remnants of the quota, especially in may and June if the quota will be applied to the second half of the season. "It may happen that the quota will be exhausted simultaneously, and some exporters will not have time to deliver the planned volumes. In the case of an incomplete Declaration of the situation be seen for the future," explains Pavensky (quoted by "the Russian newspaper"). According to him, now actual shipments of grain continue from 1 April had been exported 7.3 million tons