Wednesday, 01 August 2018
French localization of production equipment at Smolensk flax will be 50%.
The Governor of the region said that the French investors are planning to place the complex on production technology on the basis of JSC "Vyazemsky machine-building plant". 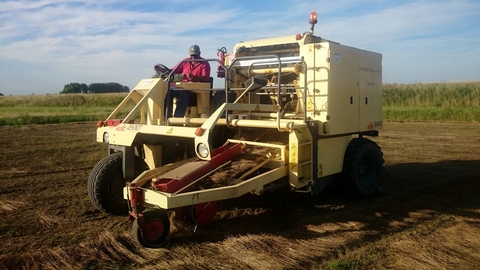 The French company "Dehondt technologies Dveloppement" plans to increase the level of localization of production of flax machinery Vyazma machine-building plant in the Smolensk region, up to 50%. On Tuesday said the Governor of the region Alexey Ostrovskiy during the first all-Russian flax field day, which takes place on Tuesday.

"In the framework of the agreement, French investors plan to place on the basis of JSC "Vyazemsky machine-building plant" manufacturing complex for the production of flax machinery and equipment for primary processing of long flax fibre. Emphasize that the company has registered a representative office on the territory of Russia. Thus already in current year letelelibum, for example, localization is planned in the region of 15%, and by 2021 will amount to 50 percent," he said.

In the framework of St. Petersburg international economic forum in 2018 Smolensk oblast and the French holding Dehondt technologies Dveloppement signed an agreement under which the company plans to list on the basis of JSC "Vyazemsky machine-building plant" manufacturing complex for the production of flax machinery and equipment for primary processing of long flax fibre. This will help to satisfy the need of the Smolensk region in the specialized technique - drills, loterevich, lnokombinat. Thanks to the implementation of the investment project in the region is planned to double by 2025, the acreage of flax.

Dehondt specializiruetsya on engineering design and manufacture of a full range of equipment for the cultivation, harvesting flax straw and primary processing of long flax fibre. The company manufactures the entire range of modern self-propelled flax machinery, the exploitation of which contributes to increased productivity.

In Soviet times, in the Smolensk region produced 10% of all flax in the country, but by 2011, the flax production in the region declined. Since that time government began to help the industry, investing there is about 300 million rubles in aid, has attracted about 1 billion rubles of investments. Now the acreage of flax is about 5 thousand hectares by 2020 plan to increase to 20 thousand hectares.