Friday, 05 October 2018
The grain harvest exceeded 100 million tons
By October 1 in Russia and produced at 100.4 million tonnes of grain in bunker weight, grain and bean farming removed from 38.9 million hectares, or 86.7% of areas follows from the operative data of the Ministry of agriculture. In 2017, by this date the harvest was received 124.3 million tons in initially capitalized weight, the average yield at the moment is inferior to last year's 4.3 t/ha or 14%. 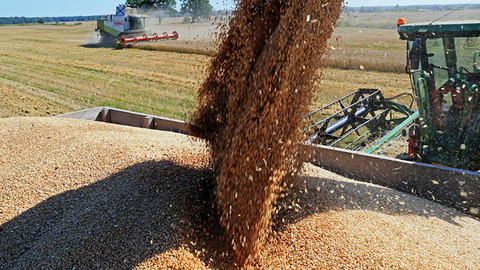 Including wheat of the new harvest by early October produced to 68.3 million tonnes threshed 89% of the area. In the Central, southern, North-Caucasian and Volga Federal districts removed 99% of crops of agriculture. In the Urals and in Siberia the harvest work continues: here the campaign is completed on 81% and 58%, respectively. In Altai region the wheat is gathered 67% of the area, the average yield in the region of 16.4 C/ha, which is above last year's level by 10%. According to information of the Ministry of agriculture of the Altai, by October 1 in the whole grain, the rate of harvesting exceeded last year's level, and if last year on this date grain and leguminous crops were threshed with 68% of the area, now with 73%. "The optimal rate of harvest in the region was achieved due to the favorable weather conditions. To reach such rates, the economy managed this season to 17 September", — stated in the message of regional office. In the Omsk region, Siberian region, the second leader, by October 1, threshed only 51% wheat, but the yield is also higher than last year (16,4 kg/ha against 15.4 C/ha in 2017).