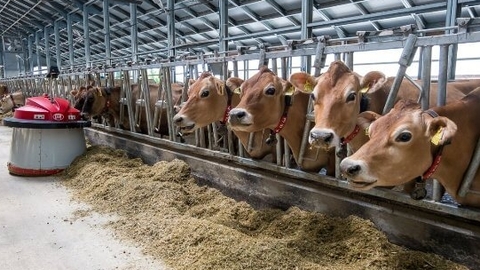 Talk about plans for an agricultural holding, specializing in the cultivation of feed for cows of Holstein-Friesian, milk processing, production and packaging of cheese, went to the meeting the Governor of Smolensk region Alexey Ostrovskiy with the President of holding Dmitry Matveev.

According to the interlocutor Agency, the head of the region visited a number of agricultural enterprises, included in the agricultural holding in Velikiye Luki and got acquainted with the technology of the existing production.

"The talks that we had, including today's entry of the group of companies "Caboc" with investments in the territory of the Smolensk region, offer the most promising prospects and the confidence that together we will create new jobs in the Smolensk region, will receive a new tax base, and the company "Caboc", in turn, may safely count not only on the reimbursement of invested funds, but also to receive a guaranteed profit," said Ostrovsky, the words quoted by the press service.

In turn, the President "Caboc" noted that Smolensk region is a major growth driver of the economy is agriculture, including dairy farming.

"We have specific examples we can see that Alexei Vladimirovich Ostrovsky puts it at the forefront of the development of agriculture — visited enterprises, delves into all the intricacies of the production. This again emphasizes that the head of the region, aimed at the modernization of agricultural production, understands the importance of this sector and its significance for our country as a whole", — the press service quoted the words Matveeva.

Speaking about prospects of development of the company "Caboc" in the Smolensk region, the President of the holding noted that the creation of dairy farms is a multistage process that requires major logistical base and it is not about building a single farm, and the establishment of several dairy complexes on the territory of the Smolensk region.