Wednesday, 24 October 2018
THE FGBI "VGNKI" TOOK PART IN BUSINESS BREAKFAST ON THE THEME OF COMBATING ANTIBIOTIC RESISTANCE, HELD AT THE RESIDENCE OF THE BRITISH AMBASSADOR
Today, October 23, Deputy Director of the Rosselkhoznadzor subordinate fgbi "all-Russian state Center for quality and standardization medicines for animals and feed" (fgbi "VGNKI"), Professor Alexander Komarov, RAS and senior research fellow, Centre Dmitry Makarov took part in business Breakfast at the residence of the British Ambassador in Moscow. The event was dedicated to the existing in medicine and in veterinary medicine the problem of antibiotic resistance, as well as the international efforts to counter the latter. 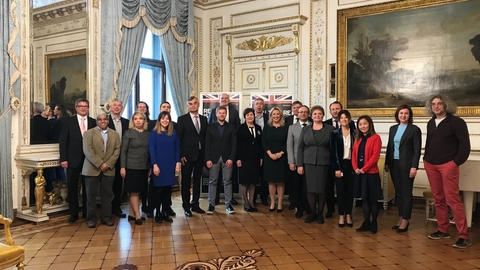 The fgbi "VGNKI" has told about the contribution of the institution and of Rosselkhoznadzor in the implementation of the adopted national Strategy to prevent the spread of antimicrobial resistance in Russia for the period up to 2030. Also the representatives of the fgbi "VGNKI" discussed the prospects of cooperation with scientific centers of other countries and with representatives of the embassies of great Britain and of the Netherlands in Moscow.

During the event, leading experts on antibiotic resistance presented. Professor Shabbir of Simdi, co-chair of the veterinary Subcommittee of the National Institute for clinical laboratory standards, USA (CLSI), commented on the recommendations of the world health organization on the use of antibiotics in livestock, and the Professor of the University of Utrecht Jaap Wagenaar spoke about the success of the Netherlands in the fight against antibiotic resistance.