Monday, 29 October 2018
Africa hides a huge potential for grain from Russia - Ministry of agriculture
The greatest potential for expanding its position in the grain market lies for Russia in the market of Africa and China, said Deputy Minister of agriculture of the Russian Federation Sergey Levin. 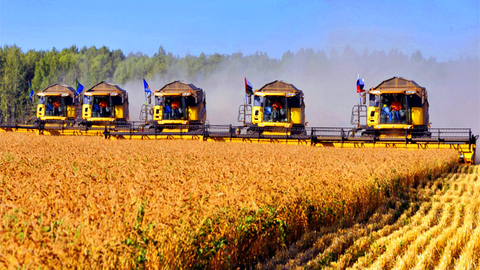 "I believe that we have the greatest potential in the two grain markets is China, a priority in relation to the whole of South-East Asia, and deep Africa, what we call "black Africa", where we can never reach, though for logistics, we are quite competitive," Levin said on the sidelines of the conference Future Investment Initiative (FII) in Riyadh.

He noted that the Russian Federation now develops basically only North Africa, whereas in this region there are many countries that consume large amounts of food.

"For example, Nigeria is a very large market. Yes, a lot of countries, the same as Uganda. But we don't know these markets as yet, we have to learn and to provide its presence there", - said the Deputy head of the Ministry of agriculture.

"In Africa, of course, very strong competition with the French, especially in the Western part. Because these markets are the French traditionally consider their own. But we are there and good competitive advantages on the part of the logistics will work," he concluded.

Последние новости
17:09 "Akron" has shipped over 100 thousand tons of liquid fertilizers in Argentina
16:03 Cherkizovo group presented a booth at the "Green week 2020"
15:08 Production of berries in Russia went into decline
14:34 GC "Yug Rusi" tender for "Performing construction of the building for the Technical upgrading of packing plant in granulation workshop meal"
14:02 The EU exported wheat is 71% more than a year ago
13:07 JSC "FGC" 39% increased loading in open wagons on the TRANS-Baikal railway.d.
12:04 Winter – not winter: what happens to winter without snow?
11:02 Exports of oil products increased by 26%
10:04 The client received from the insurance company "Consent" compensation in the amount of 3.3 million rubles for the burned-out sty
09:28 GC "Yug Rusi" tender for "Supply, installation supervision and commissioning of complete installation of the vacuum drying of the oil, performance oil 200 – 250 tons/day"
09:01 Import telescopic loader in Russia in January - September 2019
08:07 Global trends of the decade will be discussed at the jubilee "Agrocomplex" in Ufa
23:57 Agriculture
17:04 Fgbu "VGNKI" is referred to scientific organisations-leaders
16:01 "Kaliningrad meat company" has increased the breeding stock of cattle by 30% - up to 44 million animals in 2019
All news