Thursday, 14 March 2019
Belgorod farmers are switching from mineral fertilizers to organic
According to the head of the Department of agribusiness and reproduction of the environment Stanislav Aleinik, in anticipation of the spring sowing campaign the region has not experienced the shortage of fertilizers. 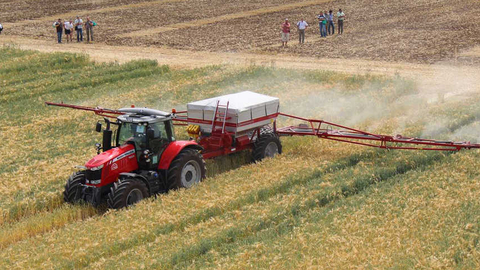 According to Aleinik, despite the fact that there is now a rise in prices of some types of fertilizers in the range of 14-20 %, the objective reasons for anxiety in Belgorod farmers there. We are not talking about complex fertilizers, and the mass use of fertilizers – ammonium nitrate and other nitrogen-containing dressing. They can be replaced with organic.

"Reserves of organic matter we have 12 million m3. A big emphasis is on organic pig-breeding: it is more aggressive, so technology training and, most importantly, the make – under special control. Poultry organics – 2 million tons and 0.5 million tons of waste from cattle. Therefore, we should not dramatize that will grow the price of nitrogen fertiliser: we more than compensate with their organic".

For spring field work, farmers need 53 tons of mineral fertilizers. Last year left 34 thousand tons and 18 thousand tons in the warehouses of suppliers within the region. However, these fertilizers are not applied universally, as a point. The ratio of chemical and organic fertilizers is already weighted in favor of the latter.

"Per hectare paid 200 kg of the active substance and 65% organics," added Aleinik.

The next step, he called the development and application of organic and mineral fertilizers. In this direction actively working "BEZRK-Belgrankorm", "Bessie" and other companies.

"Everyone understands their value and importance, but there is a sort of conservatism – said Stanislav Nikolaevich. From January 1, 2020, shall enter into force the law on organic agriculture, and the relevance of this area will grow."

Belgorod oblast is a long time coming the way of biological agriculture, and already there are results of this system work.

"We steadily received at least 3 million tons of grain. This is a good indicator, it ensures the production of sufficient feed for the livestock sector, – said Stanislav Aleinik. – Gross grain harvest in 2018 amounted to more than 3.4 million tons with a yield of 46 kg/ha. We also got a decent crop of grain corn – more than 830 thousand tons with a yield of more than 75 t/ha. It's the best productivity in the region in recent years. Soybean received more than 550 thousand tons – is traditionally the second best result after the Amur region. Soybean yield closer to 24 kg/ha is the best indicator in the country and over the years the cultivation of this crop in the region."