Tuesday, 16 April 2019
Daffodils against Alzheimer's decided to grow a former sheep farmer, and has achieved worldwide success
For several years nartsissov medical startup, the British have become famous all over the world 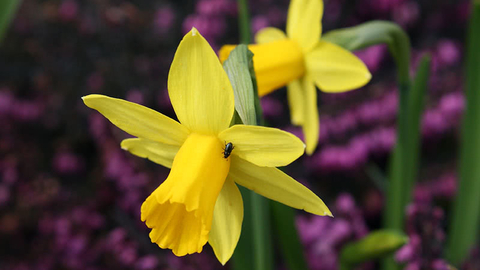 Kevin Stevens grows daffodils at the height of about 30 meters above sea level in Wales in the Black mountains, to the flowers produced the maximum amount of galantamine (substance that helps with Alzheimer's disease) - more than daffodils grown on the plain.

After harvest the flowers are processed and supplied to pharmaceutical companies for conversion to prescription pills and capsules.

The company's team of five people produces 20 kg of galantamine per year, helping more than 9 000 patients with Alzheimer's disease worldwide.

Agroceutical Products currently exports its products to pharmaceutical companies in the U.S. and Canada, and now plans to enter the New Zealand market with the support of the state Department of international trade (DIT).

Kevin Stevens says: "it's Amazing to think that the Welsh national emblem, the humble Narcissus, can improve the lives of patients with Alzheimer's disease worldwide, while ensuring the economic future for farmers, highlanders and their families in Wales".

"In recent years, increased interest in vegetable pharmaceutical preparations and in nature there are many plant compounds, which may become very important drugs in the coming years," he said.