Thursday, 06 June 2019
Russia will increase the supply of agricultural products in China
The focus of soybeans and wheat, pork, beef and venison 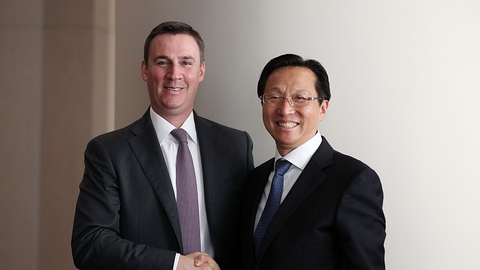 Also in the talks attended by the heads of Rosselkhoznadzor, the Russian-Chinese investment Fund for regional development, representatives of the largest agricultural companies in China.

The sides discussed issues of expanding mutual trade in agricultural products and foodstuffs, the implementation of the Plan of development of the Far East and the Baikal region of Russia and northeast China, and further cooperation in the framework of the Russian-Chinese Subcommittee on agriculture.

During the meeting, Dmitry Patrushev noted that trade in agricultural products between Russia and China is actively developing in recent years.

In 2018, the turnover increased by 25% and amounted to almost 4.5 billion dollars, and for January-April of current year the volume of agricultural trade increased by 5%, exceeding $ 1.5 billion.

Positive dynamics of indicators has been achieved thanks to the constructive interaction between the parties in terms of providing access of agricultural products to the markets of the two countries. In particular, to expand the range of supplies allowed the removal of restrictions on export of dairy products and frozen poultry.

Much work has been done on the development of Russian exports of plant products and extension of the list of regions-exporters of wheat to China.

In particular, in the framework of the Russian-Chinese summit, an agreement was signed to enable the Kurgan region in the list of subjects of the Russian Federation, having the right supplies of wheat in the Chinese market. The competent services of Russia and China signed the agreement on phytosanitary requirements for corn, rice, soybean, rapeseed, beet pulp, soybean, rapeseed, sunflower meals, myham and barley.

According to Dmitry Patrushev, it will allow to increase exports, including soybeans, the interest of which manifests the Chinese side. For its part, Russia is planning to significantly increase the production and supply of this crop, including from the Far East.

Separately, the Minister highlighted the topic of domestic exports meat to China and expressed hope for a prompt solution of the question of the recognition of the principles of regionalization of Russia on dangerous animal diseases. This will allow to begin deliveries of pork, beef and venison from regions of Russia is prosperous epizootic situation and enterprises with a high level of biological protection.

At the end of the meeting Dmitry Patrushev proposed Chinese counterpart to hold the next meeting of the Russian-Chinese Subcommittee on agriculture in July-August 2019 in Moscow.