Friday, 14 June 2019
DUM RT: "As Halal "Chelny-broiler" for us, enterprise is the flagship of the"
Power conveyor Halal production at OOO "Chelny-broiler" over the past 15 years has grown to 9 thousand heads per hour. Every day the company becomes clogged with more than 150 thousand heads according to the standards of Islam. During today's press tour, the Head of the Committee for Halal standardization of MRB RT Irek Ziganshin noted that poultry today on 100% carries out Halal slaughter. 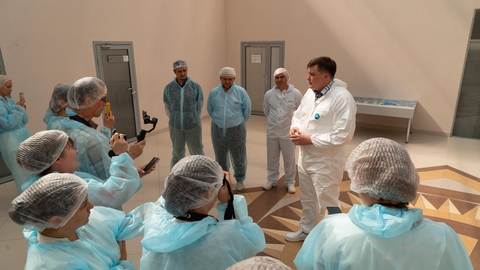 "Chelny-broiler performs the slaughter is completely Halal. In this direction the company serves as the flagship. You could draw your attention to how everything is sterile, a lot of attention is the cleanliness. Speaking of Halal slaughter, first pay attention to the options electroputere – it is important that the chicken was alive. To the slaughter also must meet certain requirements – carry out its Muslims, using a special sharp knife. Based on the number of slaughtered poultry is determined by the number of cutters. In addition, after slaughter and before sparkey another specialist controls - does the carcass for signs of life. In total work on this line 18 of miners who have been trained and received certificates," said Irek Ziganshin, adding that to allow the production of Halal products every company forwards the application to the DUM of RT, after which the professionals visit the location, assess what ingredients is a manufactured product, the basis on which to make a decision. Next is the contract stage and delivery of the certificate.

AGROSILA more than 15 years ago one of the first in Russia has obtained the certificate authorizing the production of products according to the Halal standards. OOO "Chelny-broiler", which is a Holding structure, in the period from 2013 to 2019 has produced more than 200 million Halal carcasses of broilers, using the manual way of slaughtering. In 2018, it sold more than 15.1 thousand tons of products "Halal". As noted Deputy General Director of CJSC "agrosila" on poultry Ayrat Guilfanov, the Halal standards are met not only in the slaughter but in the process of growing birds.

"In the JSC "agrosila" enter your feed production, therefore, completely eliminates the ingress of, for example, meat and bone meal – all plant-based. All formulations feeding we closely monitor and coordinate with the MRB RT," - said Ayrat Guilfanov.

According to him, standardized Halal process begins with the acceptance of a bird, where it arrives by special transport. "After the bird hits the buffer zone, where settles down through such conditions as a certain level of intelliremote and lighting. Further, the containers are placed on the line, weighed and the bird passes along the conveyor in the area of manual linkage. Following are areas of the slaughter, Sparky, plucking, separation of evisceration and chilling, as well as area cut, packaged, then refrigerated where the bird remains in storage," - said Ayrat Guilfanov.

Today the assortment of Halal products is more than 180 items – this ham and sausage, smoked and baked products, prepared foods and raw products. Processing of poultry meat is OOO "agrosila.Chelny-IPC" (included in JSC "agrosila"), the design production capacity of which is 144 tons per day or 49.5 thousand tons per year, which is one of the highest rates in the industry.