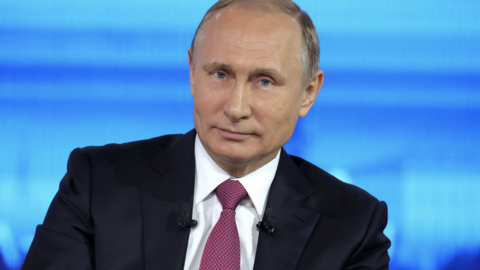 While in the Moscow Studio, Boris Akimov appealed to the President with the question of the allocation priorities of state support in the sphere of agriculture. According to farmer, the government helps more agricultural holdings, and not small businesses. Approximately 90% of all aid goes to the largest 10 companies in the country. Meanwhile, the profit centres of these companies are located either in Moscow or abroad. A small business invests in the development of the territory where he lives and works, thus is the driver of development.

There is an idea to launch in Russia programme for the development of brands and products of territorial origin, which will give farmers an impetus to the development and consumers this is good.
Boris Akimov, founder of the farmers cooperative

The President supported the farmer and said that the state should provide support.

What you said about helping farmers - it echoes discussions about what the state should first of all pay attention to. I know this discussion. Know who in the recent past was her "apologist", as a joke ready. And no joke, this is the former Governor of Krasnodar territory Alexander Tkachev. He always said the engine for the development of agriculture are the major commercial production. In fact, they provide the main commercial products, it's true. And so, not only here but also abroad. But forget the small, middle-sized farms, of course, impossible. Here I fully agree with You.
Vladimir Putin, the President of the Russian Federation

The head of state noted that the amount of farms has grown in recent years to 45% that without state support it would be impossible. Of the total volume of state support 45% are large farms and 16% on farms. Market volume, which is the farmers of today, is 12%. This means that the amount of support more than a place which is now occupied by farmers, and suggests that the state is pushing for further development.

Vladimir Putin asked the Secretary of security Council of Russia Nikolai Patrushev to study the issue of support for grocery brands.

Последние новости
08:02 CLAAS: PROSPECTS OF THE RUSSIAN MARKET OF AGRICULTURAL MACHINERY
17:04 In 2019, Russia increased the harvest of potatoes
16:06 Miratorg confirmed the full compliance of the leather industry to the international standards
15:00 AS YOU SOW, SO SHALL YOU REAP: WE ARE LOOKING FOR VEGETABLE SEEDS FOR GOOD HARVESTS
14:03 Why it is important to digitize field boundaries
13:08 Quik-Knect™ for compact tractors received the award AE50 2020
12:34 How to cope with threat to food security of Russia
12:04 Russia: stocks of wheat from farmers has become even more about last season
11:56 New hybrid corn KSS 5290
11:07 "Rosgosstrakh" in Stavropol region paid 500 thousand rubles to the agricultural enterprise for the elite sheep, imported from Australia
10:01 Original heading: the agricultural sector relies on the continuity of state policy in the industry
09:01 Production of agricultural tractors in Russia has increased 6 times since 2013
08:01 Agroeksport in stagnation. The decrease in the shipments of grain is not allowed to increase the total export of agricultural products
17:06 The Ministry of agriculture: the register of domestic producers of organic products will be in February
16:05 Stavropol Krai was presented by the famous mineral water at the exhibition "Green week" in Berlin
All news