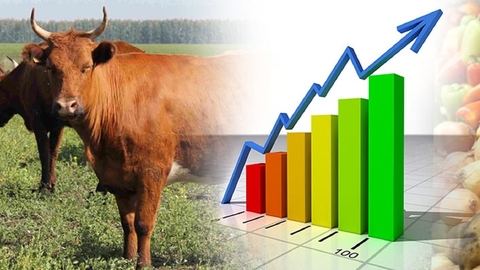 In may, the volume of agricultural production increased by 1% in annual terms and reached 352, 8 thous billion.

The number of cattle in farms of all agricultural producers at the end of may was 19.1 million head, which is 1.4% lower than a year earlier. In particular, the number of cows decreased by 0.9% to 8.1 million, sheep and goats — by 4.7%, to 25 million, While the number of pigs, according to statistics, grew by 3.3% to 25.1 million

In January — may 2019 in farms of all categories produced 5.7 million MT of cattle and poultry for slaughter (in live weight), 12 million tons of milk and 18.3 billion eggs.

Последние новости
09:04 Called the number harvested of grain in Russia
08:00 "Black CA" appeared on the market of organics
16:02 Industry-production of edible insects is a lot of uncertainty and dreams
15:03 The agricultural sector lacks funding
14:09 Abramchenko: Farmers will be allowed a year to pay for loans
13:08 Farmers will receive a deferment of payments on subsidized loans
12:02 Arrived: robots are employed in plant breeding
11:06 Of all employed in the fields of Rostov region combines 90% of machinery Rostselmash
10:08 The HARVEST 2020: July 10 produced 18.8 million tons of grain
09:01 Rosselkhozbank has provided a digital ecosystem for farmers on the "all-Russian field day in 2020"
08:02 НОВАЯ РАЗРАБОТКА ТАУРАС-ФЕНИКС. Автоматический укладчик в картонные упаковки SPM-HAS 200
17:00 Bacteria and phosphorus: how to solve the problem with phosphorus starvation of plants
16:07 July 12 — day of the fisherman. A selection of interesting facts and publications on the topic
15:04 The HARVEST 2020: on July 9, produced 16.6 million tons of grain
14:04 Biopesticides are becoming strategically important
All news