Monday, 24 June 2019
Our local growers GK "Agropromkomplektatsiya" has completed the first mowing.
This year the work of plant breeders, OOO "APK-Chernozem region" (enters in GK "Agropromkomplektatsiya") was complicated by intermittent rain. Therefore, the first mowing took place with few interruptions. However, the planned work on the Kursk earth was completed on time. 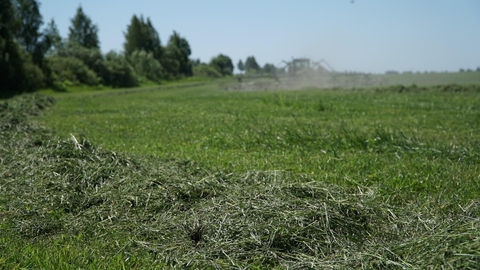 "During the first mowing of perennial and annual herbs we harvested more than two thousand hectares, - says the chief agronomist of OOO "APK-Chernozemye" Vyacheslav Prozorov. – Already laid in trenches about 20 thousand tons of green mass with an average yield of 9.4 tons per hectare. In the course of work we used two combines and harvesting complexes to them: two mowers, two rakes, a tedder, ten large-capacity machines on each combine and hay equipment – balers, rakes, two tractor transporting bales loading machine for the stacking of bales in the hay storage on-site dairy complex in cattle, "Trinity."

Bookmark hay in the hay storage production capacity of 1.5 thousand tons, was built this year in the dairy cattle complex "Trinity," was conducted for the first time.

Upon completion of first mowing was carried out a planned inspection of the fields, if necessary carried out fertilizing soil and carried out the harrowing of the crop is to close the moisture and good plant growth.

"We are now waiting for suitable grass - continues the chief agronomist of OOO "APK-Chernozemye" Vyacheslav Prozorov. – It is too early to start the second mowing. I think this stage of harvesting the crop enterprise "AIC-Chernozemye" will begin next week or later".

In the Tver region growers LLC "Rucheiskoe" (included into group of companies "Agropromkomplektatsiya") began the second hay cutting of perennial grasses for forming a fodder base for livestock, dairy cattle complexes of the Group in the region.