Thursday, 04 July 2019
In Kursk oblast started harvesting grain crops
This year the agro-industrial complex of the Kursk region enters the grain harvest is a week earlier than last year and two weeks earlier than average dates. 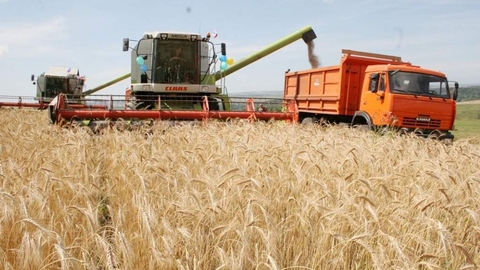 - Second of July began to harvest the farms of Belovsky, Glushkovskogo Yuzhnyy, Oboyan areas, - said the Deputy Governor of the Kursk region Alexey Zolotarev. First obmolota winter wheat varieties Ermak show yields of more than 50 quintals per hectare. But frankly, we expected a higher yield, because the region's farms have been taken to all measures. First, at the optimum time conducted sowing of spring crops, the whole complex of measures for the care of crops, in particular the North carried out with mineral fertilizers, which contributed nearly 10% more than last year, conducted fertilizing crops by the vegetation, the complex of measures for the protection of crops from weeds, pests and diseases.

For example, in JSC "Garant" Belovsky district, everything was done to get the yield of winter not less than 8 tons per hectare. And today here already there is a harvest of grain.

In the period from may to mid-June throughout the dropdown precipitation is formed higher productive plant stand of crops in the ear laid a greater number of grains.

However, established in the last two weeks of June hot and dry weather with low relative humidity, particularly affected areas in the South-Western part of the region, had a negative impact on the grain formation of winter crops.

At the same time in other micro zones of the region, in particular in the East, winter wheat yield is projected to be more than 50 quintals per hectare, slightly higher than last year.

According to preliminary data, grain production in the region is projected at 4.8 million tons with a yield of about 50 quintals per hectare.

To conduct organized harvesting of grain crops-trained 2700 combine harvesters. This will allow the daily to remove in the days of mass harvesting of about 40 thousand hectares and 20-22 working days to complete threshing of early grain crops.

The characteristics of the current harvest, problems for its orderly conduct will be reviewed on 10 July at the regional seminar-meeting in Schigrovskogo district.