Tuesday, 16 July 2019
Fisherman's day" in St. Petersburg brought together more than 40 000 people
In the seaside Park of the victory of Northern capital in a big way was the city festival of Russian fish "fisherman's Day", organized by the exhibition company Expo Solutions Grour. Large-scale folk festival has celebrated the professional holiday - day of the fisherman and the completion of major industry events – the third International fishing industry exhibition and forum of fishing industry, seafood & technology, held July 10-12 at the Expoforum Convention and exhibition centre. 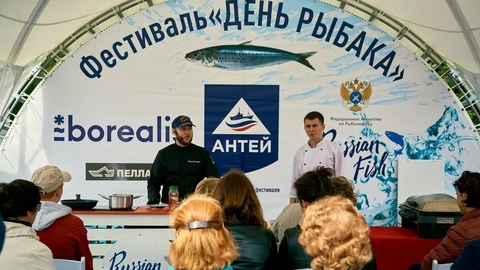 "Fisherman's day" celebrated on Krestovsky island on 13 and 14 July. Two days of holding participants in the cooking festival were more than 40 thousand of Petersburgers and guests of the city who purchased in the aggregate more than 4.5 tons of fresh fish products of the Russian and tasted about 5.5 tons of fish delicacies, in particular about 2 thousand 10 thousand oysters and shrimp. All products were offered to guests at special prices.

Partners of the festival – Russian fishery enterprise "Antey" and "Norebo", producing products under the brands "Russian fish factory" and Borealis, presented to the visitors iwashi sardine, salmon and crabs, wild white fish, Northern shrimp and squid. Were also opened sales of fish delicacies under the brand "Spring, Kurile Coast", "Petrotral 2", "Pier", "Trout on the Svir" and "the Baltic Coast".

Restaurants "Cool!", Mr. Crab shop "Stall-Bag" and other organized tastings of 200 species of fish and seafood, as chefs cook said at the master classes how to choose, store, cook different types of fish and shared personal recipes. For example, Sergei Galitsin baked cod in an interline interval of valuable fruit species and squid in Thai, and Maxim Saburov presented a new vision cutlets of pike-perch in a secret sauce with whitefish on the grill, under the Kalmar tapenade with cucumber and accompanied by a salad with slices of cod in almond sauce.

The highlight of the program became the culinary mega-show chef Sergei Anikin. He boiled Admiral 1200 litres of soup in the giant pot, fried on the grill freshly caught wild king salmon, taken on a special flight from the Far East and launched a huge smoker on charcoal.

No less spectacular at the festival passed the championship on a barbecue. The ability to cook fish on the fire competed with 10 teams in 8 nominations: "Red and white fish", "Shrimp", "Sturgeon", "Murmansk halibut", "Flounder", as well as a mysterious "Black box", "the Vegetarian grill" and even "Dessert". The President of the Russian Society BBQ Andrey Romanov and his team had to taste more than 80 dishes. Absolute Champions by the BBQ fish was the team of the network of Belgian cafe Manneken Pis.

The festive atmosphere of the "Day of the fisherman" supporting professional artists: there was live music, quiz was conducted on the fish theme, master classes in Ebru, painting plaster figurines and ECOSOC, lottery with prizes for adults and children. The festival grounds were decorated with art objects – the figure of a huge white sturgeon and a real rowing boat, which established the partner of the festival – Leningrad shipyard "Pella".