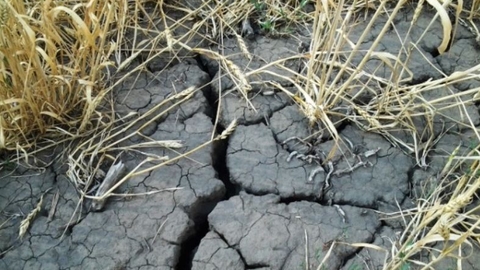 Подписаться на новости
Agri-Produce  Russia's Regions
"Dangerous agrometeorological conditions in the winter (rot), spring and summer (soil and atmospheric drought, droughts) have dried out the soil, reduced the moisture supply of plants, called in some places declining yields and loss of crops.
Commission inspection of crops of spring cereals and their assessment, including the economic feasibility of harvesting, confirmed the death of crops on the area of 124,1 thousand hectares, suffered 225 households in 22 districts," reported IA "Sarbk" the Ministry of agriculture in the region.
In the framework of the regime established in the region implemented a plan to eliminate and reduce damages from emergencies, are assessing the losses caused to producers, say in the Department and declare that the amount of the projected harvest will fully meet the needs of the region in seeds, food and fodder grain, and will allow to realize the agricultural products outside the region.

Последние новости
14:06 Monthly review of the market of oilseeds
13:06 Machinery Kverneland adds to the list of "Rosagroleasing"
12:05 Export wheat prices peaked in February of last year
11:01 Ended in Berlin "Green Week-2020"
10:04 Weekly market review sugar
09:06 Scientists of the Crimean Federal University have found a way to speed up production of essential oils
08:09 Holding company "Novotrans" increasing transportation of products of metallurgical enterprises
17:01 Program, new speakers, participants and sponsors of the International agricultural conference WHERE the MARGIN is 2020
16:08 Russia is preparing for a commemorative participation in the Brussels exhibition
15:41 GC "Yug Rusi" tender: "Supply of workwear and PPE to 2020" for the needs of enterprises of GC "Yug Rusi"
15:36 The large supply of technological equipment in the Kursk region
15:04 The network of hypermarket O ' KAY refuses plastic bags from the primary oil
14:02 AGCO-RM is launching a new leasing program for tractor Massey Ferguson® 6713
13:03 Rzs: the restriction of grain exports hit farmers
13:00 GC "Yug Rusi" tender: "Supply of two and three-component packing (DOY) in 2020. for the needs of JSC "SWC "Krasnodar".
All news