Thursday, 29 August 2019
Innovative fish processing plant has opened in Murmansk
The construction of the enterprise invested more than 700 million roubles, it will produce more than 50 tons of fish per day. 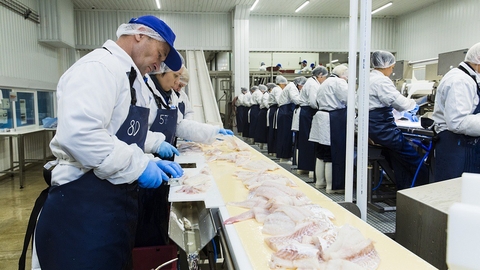 New fish processing plant "Russian Bang" opened on Wednesday in Murmansk. As announced at the opening ceremony of the acting Governor Andrey Chibis, built in record time, the plant will expand the range of fish products in the region and to reduce the price on it.

"It's great that factory appeared in a clearly designated time, April 25, was a bookmark. It is important that this partnership took place, we see the running conveyor belt," said Chibis.

He noted that this will help the continuation of the regional project "Our fish", in which in the Murmansk region in several stores started selling the fish to a third cheaper than average prices. According to the Lapwing, who had built a new plant investors — Russian fishery company and group of companies "Agama" — intend to deliver in the region including fish from the Far East, which will give another impetus to the development of the fishing industry.

According to the regional government, the volume of fish products the new plant will be more than 50 tons per day. The raw material will be chilled and frozen cod and haddock, caught by Russian fishermen in the North-East Atlantic zone, it will produce frozen fillets of cod and haddock, all kinds of cuts, steaks and mince.

The plant is equipped with modern technological equipment — production defroster, filleting machines, freezers, as well as innovative robotic line for cutting fillet of cod fish species from Icelandic company Marel: today there are only 26 similar devices. Total investment in construction amounted to more than 700 million rubles. Planned tax revenues to the budget system of the Russian Federation will be 50,7 million roubles per year, of which more than 40 million in the budget of the region. The plant is designed for 210 jobs.

The project is implemented under the state program of support of modernization of the fish processing industry (of investcom). Simultaneously with the launch of a new plant investors began the construction of another fish processing factory in Murmansk — "Russian haddock". Plans to launch it in 2020, the total investment in construction will amount to 250-300 million rubles, the volume of production planned in the amount of not less than 25 tons per day.