Wednesday, 11 September 2019
"PRO MILK" WORKED THE THEORY INTO PRACTICE AND PREPARING FOR THE FALL SEASON
From may to August 2019 in the framework of the project "PRO Milk: professionals on processes, production and product" was held more than 30 workshops. In order to maximize the audience coverage during the period of active forage work demonstrations of equipment were held by the company CLAAS and its dealers around the events of "Institute of milk" in several regions of Russia. 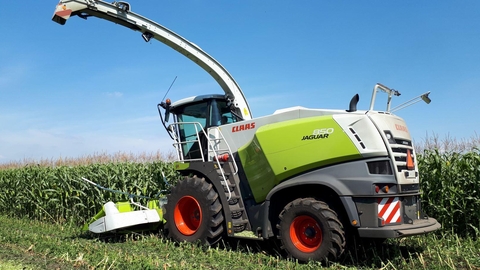 Wide regional coverage helped to formulate the program in such a way as to demonstrate the potential of modern machines for cleaning of various fodder crops adapted to local climatic conditions. In particular, experts CLAAS gave recommendations for setting up production chains under harvesting alfalfa, ryegrass, perennial and annual grasses and corn for silage.

The largest number of demonstration of equipment CLAAS and, in particular, the AXION tractor in combination with a disc mower DISCO was held in the Republic of Tatarstan, which is particularly popular with farmers now enjoys the cultivation of alfalfa. This perennial legume group is an excellent precursor for many commercial crops, because it saturates the soil a lot of nitrogen and enriched in organic matter. When the maximum yield of 247 kg/ha productivity by mowing reached 442 t/h with a fuel consumption of about 2.6 l/ha. Experts CLAAS gave a detailed explanation of what the settings of the mower allow you to reach similar results.

In the Nizhny Novgorod and Sverdlovsk regions, the main participant of events was forage harvester JAGUAR 850, is well proven in the world when harvesting corn for silage. However, during the ongoing demonstration in the summer the focus was on the capabilities of the machine when harvesting alfalfa. In particular, the results of the final evaluation of the results of cleaning were recorded a performance of about 113 t/h with a fuel consumption of 9.4 l/ha and the working speed 12 km/h. In mid-August, continued with a demonstration of harvesting corn silage harvester JAGUAR.

The whole work of art was accompanied by measurement of key performance indicators, and present farmers acted as independent experts to confirm the results. In addition, experts CLAAS and "milk Institute" conducted a survey of farmers regarding the current results of the implementation of the newest technologies of forage, the typical problems they encounter and of the most effective solutions. Collected in the framework of the project "PRO Milk" information and results of the demonstration will be analyzed and submitted to Russian farmers in November. Also their view will be developed the action plan for the next 2020.