Monday, 16 September 2019
The sunflower harvesting has begun in Ulyanovsk region
Today, the culture harvested from an area of 295 hectares, the yield amounted to 541 ton with an average yield of 18.3 C/ha. 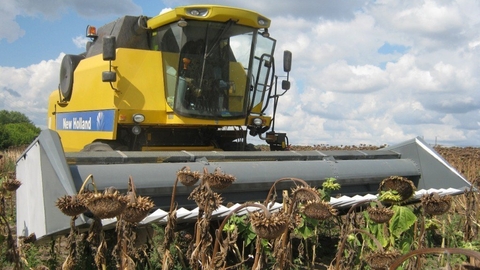 - At us the harvest is almost in all Federal districts. To harvest we have 80 million hectares. And most importantly, we have three million tons of increased crop of wheat, it is also positive. This volume, as we assume, will allow to provide domestic demand, and implement our export opportunities, export potential. According to today, the grain is threshed from the area of about 34 million hectares. Has almost 95 million tons of grain we have harvested, and yields, we have this year slightly better than last year, to 29 quintals per hectare, – reported the Minister of agriculture Dmitry Patrushev, Russian President Vladimir Putin.

Ulyanovsk region takes the third place in terms of harvesting grain and leguminous crops in the Volga Federal district.

The yield of these crops is 20.3 C/ha. In our region they are harvested from an area of 591 thousand hectares, or 97.1% of the plan. In addition, for the fifth district, we have exceeded the planned 100 thousand tons, - said Mikhail Semenkin.

Coming to the end of the sowing campaign. Farmers Ulyanovsk region have fulfilled the plan of sowing of winter grain crops. In total, the region planted more than 288 thousand hectares of winter, or of 102.9% of the plan.

Последние новости
13:08 AGROSILA in 2020 will implement artificial intelligence on a dairy farm
12:04 In the Orenburg region, the farmers will receive for interns 2 million rubles
11:02 Freight report, 3 week 2020
10:03 KRASNODAR PLANT "CLAAS" IS THE MOST EFFECTIVE ENTERPRISE CONCERN CLAAS
09:00 In the Perm region affected by the disaster, insurance payments to farmers for ruined crops 2019 doubled the volume of premiums
08:05 One blow
17:01 JSC FGK for 9% of the increased loading in the gondolas on the Volga railway.d.
16:08 The volume of export deliveries Samara APK in 2019 increased by 53%
15:06 This year on Kuban will lay more than 1.5 hectares of young gardens
14:02 The Ministry of agriculture has developed risk indicators of violations to inspections of field use
13:06 Dmitry Patrushev, the head of the Ministry of agriculture
12:01 Putin signed a new Doctrine of food security
11:06 60% of the seats at the "XIII Winter grain conference" are already taken
10:07 The Ministry of agriculture of the Russian Federation has increased the requirements for the custodians of the reserves of the intervention Fund
09:01 The construction of the Transbaikal grain terminal will begin in March
All news