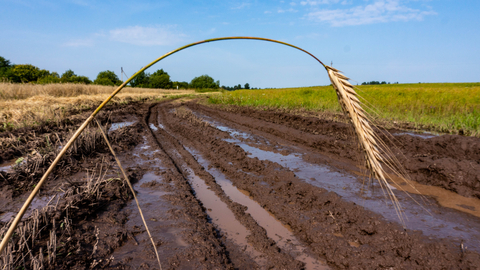 In the Republic 15 August-there is a regime of emergency because of the waterlogged soil. This did not allow many farmers enter the field of work and time to procure fodder for animals, and also clean crops.

"Some of the fields harvested, yield, see, in the Udmurt Republic we have very good is 24.6 centners per hectare, last year was 20.5 per hundredweight, 95% [of the fields], we have been able to handle yet, according to the plan we had to collect in the range of 780-800 thousand tonnes, collected 570 thousand tons. Not so bad, the weather did let a few weeks of around the clock work, but there will be losses, there are losses, especially it's visible on the Northern territories", - said Abramov.

According to her, the damage from waterlogged soil is 738 million roubles, this data is now analyzing the RF Ministry of agriculture, after which will decide on granting financial assistance to farmers of the Republic. While seasonal work related to harvesting and sawing campaigns in the region, according to Abramova, actually completed.

"The weather is not permitting to go out on the field, left the preparation of the plowed fields. After that, we will be ready to lift the state of emergency," - said the Minister.

At the end of August Abramova told TASS that the harvesting of grain crops on the territory of the Udmurt Republic due to bad weather will be delayed for a month until the end of September. The loss of crops was registered in the territory of more than 700 farmers. In August, Prime Minister of Udmurt Republic Jaroslav Semenov signed a decree according to which the regional authorities will start to pay part of the costs to farmers who want to insure their crops.