Monday, 21 October 2019
Miratorg Bryansk region signed an investsoglashenie on the development of pig-breeding project on 2, 44 billion rubles
APH "Miratorg", the pork producer №1 in Russia, Bryansk region signed an investment agreement providing for investment in the amount of 2.44 billion rubles in the development of pig-breeding project with a capacity of 6.4 thousand sows. The signing of the agreement took place in the framework of the VIII International Slavic economic forum in Bryansk. Miratorg is the largest investor in the agricultural sector of the Bryansk region with the total amount of investment of the company exceeds 96 billion within the poultry and livestock projects created over 10 thousand jobs with a decent wage of 35 thousand rubles. Further development of agricultural holdings associated with an increase in depth of processing of agricultural products and the launch direction of the pig. 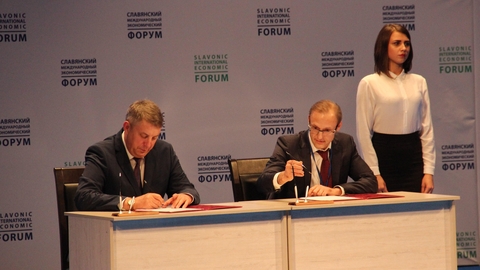 New breeding site in Suzemskogo district of the region are an integral part of an interregional project of doubling the capacity of the pig breeding division of "Miratorg" up to 1 million tonnes of pork in live weight per year, which will allow to cover the demand of Russian imports of chilled pork. In 2018 the agricultural holding and the government of the Bryansk region signed an agreement envisaging investments in the amount of 3.8 billion rubles in the development of the construction project in the region of two pig-breeding complexes on 6800 sows with a total capacity of 26 thousand tons of marketable pork per year. The new agreement is the result of further implementation of the strategy for expanding agricultural production with high added value and includes the construction of two automated pig farms with a capacity of 6,400 sows that will produce pork with a designed capacity of 25 thousand tons per year.

The investment project will create more than 90 jobs for area residents and will provide increased tax revenues to 65 million rubles to budgets of all levels, including 35 million rubles to the regional budget annually. During the construction of the sites will use the latest technology and best practices the world leaders in pig production, which will allow not only to achieve high production efficiency, but also minimize the impact on the environment.

"Bryansk oblast is a key to implement the strategy of "Miratorg" the provision of quality, safe and affordable meat for consumers. With the support of the government of the Russian Federation and the Bryansk region have managed to build a vertically integrated infrastructure for the production of poultry and beef, which is unique. The region gives opportunities to investors to create modern production, to develop the real sector of the economy. Until the end of 2019 will be launched in the first pig-breeding complexes in Cescom and Suzemskogo areas. The construction of the next two sites will be implemented in 2020. New jobs will be located mostly in rural areas, and therefore residents will have the opportunity to work on their native land on high-tech industries with all the social guarantees and completely "white" salary", - said the press service of the APH "Miratorg".