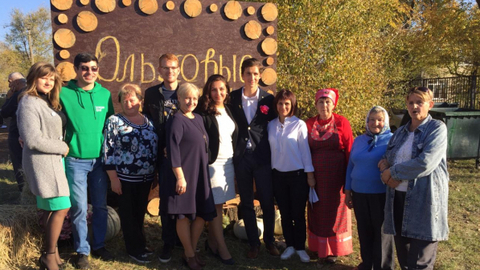 The event was attended by more than 1 million people. Opened the festival "Alder pick" view rooms Cossack folklore collectives of the Rostov region, and the Central event was the meeting of young ecologists with the exhibition of creative works and a contest of school environmental campaign teams from all schools in the district.

The jury that evaluated the competition has entered the organizers of the festival and head of the educational center of the Russian Union of rural youth (RSSM) Sergey Karahasan, which was read to the organizers and participants of the festival greeting coordinator of the onf project "Village. The territory of development", the Chairman of the RSSM Yulia Ogloblinoj. "The festival is a kind of exam for team development and the successful organization will serve as a model for rural activists who develop the tourism potential of their territories," – noted Ogloblina.

In addition to the competition program of the festival was held fair of Souvenirs and products of local artisans – baskets made of wicker, Handicrafts made from birch bark. "All this was done by local residents out of scrap materials. This looked like the work better than those that make the capital's designers and decorators", – said the representative of the RSSM.
Festival guests were able to stroll in local woods and enjoy the unique natural landscape. They asked to continue the tradition next year.
"The organizers of the festival were the ordinary people who had never carried out similar activities. They did a fantastic job. I hope that the festival will become an annual event, after all, all the guests, such events in the County do not remember", – shared his impressions the Chairman of the youth Parliament at legislative Assembly of Rostov region, mentor the development team Oleg Youths.

Development team Aljaskinskogo rural settlement in 2019 became the winner of the competition "Incubator of rural initiatives" implemented through a grant of the President of the Russian Federation on development of civil society. Successful implementation of initiatives allowed the activists to enter the top 10 teams in the development of the onf project "Village. The territory of development".

The objectives of the project include the monitoring of the implementation of national projects and government programs affecting the development of rural territories, development of proposals to improve the quality of life in rural areas and involvement of local residents in development of their settlements.