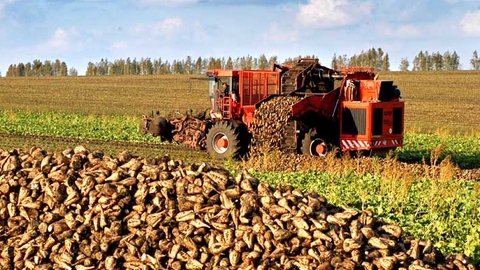 In 2018 at the same date were collected 3.64 million tons. The yield of culture in 2019 on average 472,9 dt/ha in 2018 — 366,6 kg/ha. Leaders this year, as the yield of steel Kalacheevskiy, Khokholskiy, Semiluki, Paninskaya, Novousmanskiy, Talovsky districts: they yield more than 500 kg/ha. In the Anninsky district collected 421,6 thousand tons — 10% of the total yield of the area. High fees in the Liskinsky Novoaleksandrovka, Talovskaya, Gribanovskiy, Buturlinovskiy'skiy and Semiluksky districts of the region.

As previously reported IA REGNUM, in September at a meeting chaired by Governor Alexander Gusev became aware of the plans to eliminate the region's own varieties of sugar beet: while the share of imported seeds is 99% and plans to bring varieties that are 100% will cover the needs of regional manufacturers.

Последние новости
09:01 The construction of the Transbaikal grain terminal will begin in March
08:07 Towed vehicles the company enters new market in Egypt
17:09 "Akron" has shipped over 100 thousand tons of liquid fertilizers in Argentina
16:03 Cherkizovo group presented a booth at the "Green week 2020"
15:08 Production of berries in Russia went into decline
14:34 GC "Yug Rusi" tender for "Performing construction of the building for the Technical upgrading of packing plant in granulation workshop meal"
14:02 The EU exported wheat is 71% more than a year ago
13:07 JSC "FGC" 39% increased loading in open wagons on the TRANS-Baikal railway.d.
12:04 Winter – not winter: what happens to winter without snow?
11:02 Exports of oil products increased by 26%
10:04 The client received from the insurance company "Consent" compensation in the amount of 3.3 million rubles for the burned-out sty
09:28 GC "Yug Rusi" tender for "Supply, installation supervision and commissioning of complete installation of the vacuum drying of the oil, performance oil 200 – 250 tons/day"
09:01 Import telescopic loader in Russia in January - September 2019
08:07 Global trends of the decade will be discussed at the jubilee "Agrocomplex" in Ufa
23:57 Agriculture
All news