Wednesday, 25 December 2019
Putin promised the farmers to solve the issue with the construction of objects for deep processing on agricultural land
Vladimir Putin at a meeting with members of the public in Adygea supported the proposal of the Chairman of the Tver regional branch of the Russian Union of rural youth (RSSM), a member of the onf and farmer Alexei Trofimov, who addressed a request to allow farmers to build on agricultural land objects for deep processing of their products. 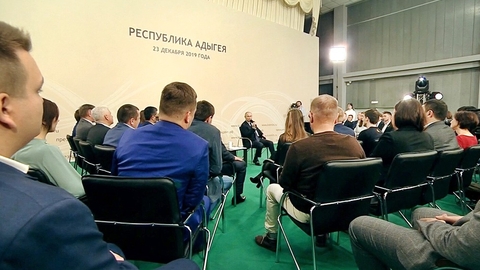 "Agricultural land can be used for agriculture and construction of facilities for primary processing. And for the construction of objects for deep processing necessary to translate the earth from one category to another, which is practically impossible at the moment. This is a huge time and money," – asked the farmer to President.
As stated by Vladimir Putin, on agricultural land are actually prohibited to build facilities of a capital nature, as the legislator there is always the fear that it will be a loophole for unwarranted transfer of land to another category.

"But on the other hand, I understand that if the company took place, it is working, you are not interested in that land to waste, but to its own production to develop... Necessary to maintain, only need to think about a mechanism that will prevent fraud and illegal trafficking under the guise of treatment," – said the President, adding that this issue will be taken up for discussion at the upcoming state Council on the development of agriculture and rural areas.
The turnover of agricultural lands to farmers – the problem sore. So, the Chairman of the Suburban regional office RSSM, a farmer from Lukhovitsy Alexander Lagutin urged to increase 10 times the tax for unused agricultural land for the purpose.

"According to various media sources, somewhere between 30 and 50 million hectares of land we have not used. This wine unscrupulous owners who do not think about agriculture, and only think about their pocket... Now if preferential rate of 0.3 mm for agricultural land. If it is not used, it goes in the "other" category is 1.5%. Let's try 3% to do, even faster I think the owners," said Lagutin.

Vladimir Putin in turn stated that this issue is already being discussed at the Ministry of agriculture, Ministry of Finance and the Ministry of economic development. "Just in this direction I think. So your suggestion coincides with those options, which are discussed in the government", – said the President.