Monday, 27 January 2020
Production of agricultural tractors in Russia has increased 6 times since 2013
President of the Association "Rosspetsmash" Konstantin Babkin acted in the Federation Council, where he discussed topical issues of development of domestic tractor building. The meeting was held by first Deputy of the Federation Council Committee on agrarian and food policy and environmental management Sergey Mitin. 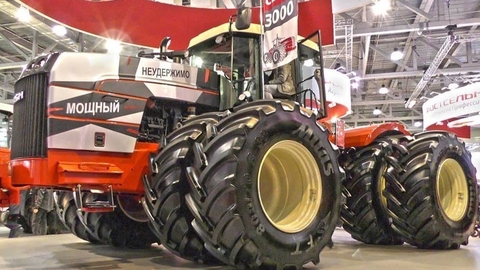 The meeting was attended by Deputy Minister of industry and trade of the Russian Federation Alexander Morozov, General Director of "Rosagroleasing" Pavel Kosov, the Federation Council members, representatives of relevant ministries and agencies, financial institutions, leaders of factories of agricultural machinery and industry experts.

Sergey Mitin has noted a significant growth in the production of Russian tractors and positive impact of the implemented complex of measures of state support, which allowed factories to increase production capacity, raise product quality, create new machines. Despite this domestic and agricultural engineering continue to be major challenges for the modernization of agriculture, which is faced by technical and technological nedonoshennye.

In his speech Konstantin Babkin told about the development of tractor industry in Russia and the prospects of this field of engineering. So, from 2013 to 2019, the production of Russian tractors for agriculture has increased by 6 times, to 3355 units. Continuous improvement of the quality of this technique says increasing exports: in 2013 it increased by 7 times, up to 432 units.

Only in recent years, domestic factories have embarked on and implemented several large investment projects. In particular, Rostselmash by 2021 will build a new tractor plant and will start production of transmission, upgrade paint line, expanding the parts warehouse. The company will allocate for these purposes more than 7.3 billion.

St. Petersburg tractor plant has developed and launched a new tractor 3-4 class To 424, and also opened a center for the production of automatic transmissions for tractors.

Annually to develop the momentum and to implement investment projects plants could, including through effective measures of state support, among which the fundamental software became resolution No. 1432. Through this mechanism, the production of Russian agricultural machinery from 2013 to 2018 grew by 3.3 times, to 100.6 billion rubles, progress has been made in the production of domestic components.

Production capacities of Russian enterprises allow to increase the production of tractors for agriculture 2.9 times.

To achieve this goal and the development of domestic agricultural machinery in General in the budget for the years 2020-2023 it is necessary to provide for implementation of the program No. 1432 of not less than 16.5 billion rubles. annually, retaining a subsidy of 15% of the price of agricultural machinery.

It is necessary to subsidize preferential loans and direct subsidies from regional budgets only on the condition the purchase of agricultural equipment, meets the requirements of order No. 719. It is important to ban the purchase of foreign technology in the system of Federal leasing, to lower interest rates on loans, the tax burden on enterprises to limit the growth of prices for energy resources and metal.