Thursday, 13 February 2020
John Deere has expanded the list of equipment included in the program of state subsidies
The company's products become more affordable for Russian farmers at the expense of localization in Russia. 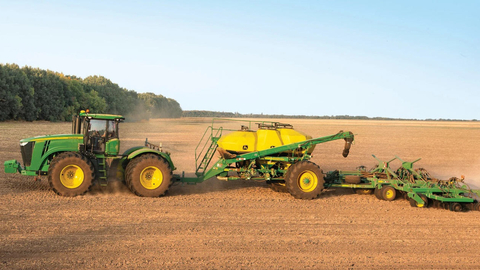 In the second half of 2019, the John Deere company has fulfilled the requirements of government resolution No. 719 "On the confirmation of industrial production on the territory of the Russian Federation", increasing the level of localization of components and production operations for grain drills models 455, as well as a number of modifications of the pneumatic drill model 730 and cultivator model 2210. Due to this, the company was able to include this equipment in the state program of support of agriculture in the year 2020, such as the 1432 and leasing programs of JSC "Rosagroleasing".

"The company plans to further increase the degree of localization of production in Russia to expand the list of equipment available for participation in public support programs. Regardless of the country where sold or produced equipment, one of the main priorities of the company is product quality. To localized operations and components are common corporate requirements, which ensures the high quality John Deere equipment," says Konstantin Ovsienko, Manager production projects for John Deere.

Information about the John Deere company:

Deere & Company (NYSE: DE) is one of the world leaders in the field of engineering, which produces agricultural, forestry and construction equipment, and provides a wide range of services. From 1837 to the present day, the John Deere company produces innovative products of the highest quality, maintaining the tradition of honest business.

John Deere contributes to success for all, whose activity is connected with the earth, that is, someone who works the soil cultivates and harvests and transforms, improves and equips the land, meeting the ever-increasing world demand for food, fuel, shelter and infrastructure.

The first deliveries of agricultural equipment John Deere in Russia began more than 100 years ago, and since 2003 there is a Russian division of the company. Currently in Russia there are two of John Deere plant – the plant in Orenburg opened in 2005, and production in Domodedovo launched in 2010. In addition, the company has a wide dealer network in Russia.

Последние новости
12:04 "We focus on the Russian soul, the beauty of Russia, to the Russian land. It is the assets that we should use it": Perspectives of development of the Russian organic sector were discussed at BIOFACH-2020
11:02 Company Master Mushroom was presented at the PRODEXPO 2020 complete range of packaged products
10:08 "Development of agriculture of the Voronezh region is an example of efficiency" – the Chairman of the Rosselkhozbank
09:04 MORE RESEARCH, BETTER CROP. 5 YEARS OF INNOVATION CENTER "AGROTERRA"
08:00 AGCO-RM exceeded the planned sales of Valtra in Russia in 2019 40%
17:02 Zainsk sugar finished the season beet processing and is prepared to invest in private projects of more than 120 million roubles
16:00 Japanese experts will train Russian engineers lean manufacturing in Rostov-na-Donu
15:03 The Chairman of the Board of Rosselkhozbank and the Head of the Udmurt Republic have agreed to develop a partnership
14:08 "Akron" has submitted to the farmers of the Central Federal district of the new technology to increase yields
13:09 The Ministry of agriculture for the year, the share of domestic sunflower seeds need to increase by 10-15%
12:04 The Association "Greenhouses of Russia": the sale of red roses for February 14 in Russia increase significantly
11:09 Cherkizovo group announces financial results for the fourth quarter and 2019
10:35 Racing on tractors "bison-Track-Show" will be held on may 24, 2020
10:02 The Ministry of agriculture approved the volumes of subsidized transportation of grain
09:00 Rosselkhozbank called the sphere of agricultural products with the greatest contribution of farmers and the highest profitability
All news