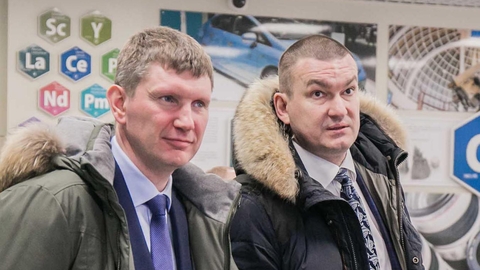 Accompanied by the Chairman of the Board of Directors of JSC "Akron" Alexander Popov and the Deputy Governor of the Novgorod region Evgeny Bogdanov, the head of Department visited Europe's largest Assembly "Ammonia-4" and a unique production of rare earth elements.

During the visit, they discussed issues of efficiency of production, raw material independence and the implementation of major investment projects.

The Minister of economic development Maxim Reshetnikov was in Veliky Novgorod delegation headed by the Prime Minister of Russia Mikhail Mishustin. This is the first working visit of Michael mishustina in the Russian region as the head of the government.

The Acron group is one of the leading vertically integrated mineral fertiliser producers in Russia and the world. Chemical enterprises of the Group located in Velikiy Novgorod (JSC Acron) and Smolensk region (JSC "Dorogobuzh"). The group maintains its own phosphate raw materials in the Murmansk region (JSC "NWPC") and implements the project to develop potash deposits in Perm region (JSC "MCC"), has its own transportation and logistics infrastructure that includes three port terminals on the Baltic sea, and sales networks in Russia and China. Subsidiary company of JSC "Akron" — NorthAtlanticPotashInc. (NAP) owns the mining licences of 11 parts of potassium salt deposits Evaporite Prairie in Saskatchewan (Canada). Acron also owns a minority stake (19,8%) in the Polish company GrupaAzoty S. A., one of the largest chemical manufacturers in Europe.

In 2018, the Group's sales amounted to 7.3 million tons of main products. Deliveries were carried out in 67 countries. The main markets of the Group are Russia, Brazil, Europe and the United States.

In 2018 consolidated revenue of the Group under IFRS amounted to 108 062 million rubles ($1 723 million U.S. dollars), net profit – 13 318 million rubles (212 million USD). Shares of PJSC "Akron" is included in the quotation list of the first level of the Moscow exchange, the global Depository receipts are traded on the London stock exchange (Ticker AKRN). The staff of Acron Group has about 11 thousand people.