Wednesday, 18 March 2020
The biggest cake in Russia was baked with the help of a JCB
In Voronezh city, on the occasion of the farewell of carnival was baked pancake with a diameter of 2 meters 52 centimeters. In its preparation was attended telehandler JCB 541-70 AGRI. The event was organized by the company "EkoNiva" ─ one of the leading agricultural holdings in Russia, which is engaged in the supply and service of imported agricultural machinery, and dairy and meat livestock farming. 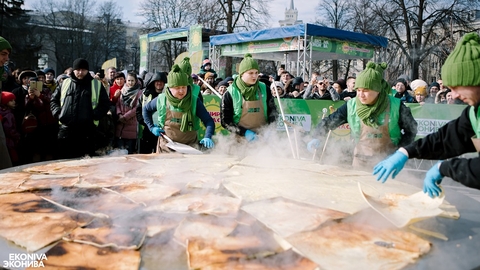 Подписаться на новости
machinery  Technologies  Events  Company
The biggest cake in Russia was baked using dairy products EkoNiva. On cooking it took 7 liters of milk, 60 eggs and 5 pounds of flour.
For the fucking record was made a special frying pan that was installed on the main square of the city using a telehandler JCB 541-70 AGRI. When the batter was poured into the pan, loader operator on team raised and lowered the big lid. Giant pancake was divided into portions and treated everyone.
Video of the cooking process sent to the international Agency "Interrecord" for registration in the Russian Book of records. The previous record, recorded in the Russian Federation, was a pancake with a diameter of 2.17 m baked suburban cooks during the Shrovetide festivities in 2014.
"We are pleased that the new national record was set with the participation of our equipment. It's nice that the company "EkoNiva" is official dealer of JCB in Russia, chose telehandler JCB 541-70 AGRI. He is very popular among Russian farmers for the highest level of performance and reliability", ─ said Svetlana Petrova, Deputy General Director, JCB Russia and CIS.