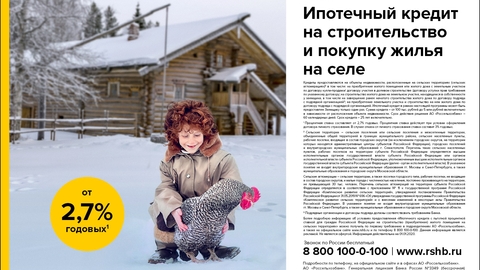 The average age of borrowers is 36 years old. More than half (64%) of all orders came from the couples (2/3 of which – families with children); unmarried women and unmarried men have filed 24% of applications, the remaining 12% of borrowers - people in divorce. More than 42% have applied for a mortgage the rural women and 58% men. The largest size of the loan program rural mortgage interested in men - an average of 2.3 million rubles, while the average size of applications from women is 2.0 million. According to Rosselkhozbank, the most popular rural mortgage uses in the Republic of Bashkortostan – 2.6 thousand filings.

These and other data received analysts of Russian agricultural Bank, examining their own statistics lending program rural mortgage. From the beginning, the RAB received over 25 thousand applications for the sum of over 54.6 billion roubles.

"First of all, the mechanism of preferential mortgage lending designed to improve the quality of life of people living in rural areas. We see the natural high demand of the villagers for the construction and purchase of housing. In addition, analysis of the activity of customers of the agricultural Bank has shown the desire of couples to improve their living conditions and to buy housing in the rural area," - commented the Director of retail business Department of Rosselkhozbank Olga Shvedova.

The annual interest rate under the program established by the Ministry of agriculture in the amount up to 3%. While personal insurance rate in Rosselkhozbank does not exceed 2.7%. The difference between the market Bank rate and a reduced rate subsidized by the government. The program "Integrated development of rural areas" operates in all territory of Russia, except Moscow and Moscow region, St. Petersburg.

Application for preferential agricultural mortgages in Rosselkhozbank can be submitted by any citizen at the age from 21 to 75 years. The amount given out for the term up to 25 years of the loan ranges from 100 thousand to 3 million rubles (for the Leningrad region and the far Eastern Federal district – 5 million roubles), the initial contribution starts from 10%.

JSC "Russian agricultural Bank" – the basis of national credit and financial service system of agroindustrial complex of Russia. The Bank was founded in 2000 and today is a key lender to the agriculture of the country, is among the largest and most stable banks in the country in terms of assets and capital, as well as the leaders of a reliability rating of the largest Russian banks.