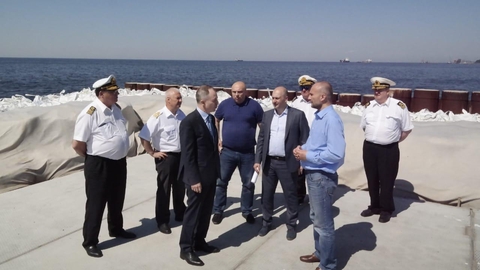 In the process bypass Playground facility Deputy General Director of "Novotrans Asset" Vyacheslav Petrenko said that in June 2020 the holding company "Novotrans" completed work on the creation of artificial land plots universal terminal LUGAPORT. According to him, the terminal, after reaching the planned capacity in 2024 will be one of the most significant infrastructure projects for our country. The advantageous geographical position and possibility of reception of ships with a large displacement will significantly increase export and import potential of Russia.

"The terminal is designed for transshipment of a wide range of break-bulk, bulk and General cargo, creating thus the necessary conditions for reorientation of Russian export cargo, following today through the ports of the Baltic States", - said Vyacheslav Petrenko.

Yuri Tsvetkov said the scale of the project, the fast pace and quality of construction works and stressed that the project of Group of companies "Novotrans" important for the further development of transport infrastructure of the North-West and the country's export potential.

During the working visit, the Deputy head of the Ministry of transport also visited the motor-railway ferry complex in Ust-Luga port and got acquainted with the work of the Stevedoring company "Novotrans" as the General agent of the FSUE "Rosmorport" in provision of services for the handling of goods in the territory of the ferry complex. "Novotrans" reorganized cargo and transport flows, and modernization of the complex, which has a positive impact on the growth of turnover, expanding the geography of exports, including agricultural products to Europe.

The working visit was also attended by the head ILA of the Baltic sea, Peter Parinov, the captain of the Big port of Saint-Petersburg Alexander Volkov, the Deputy Director of the North-West basin branch FSUE "Rosmorport" Yuri Akhmedov.

In the development of 4, 5, 6-th stage of the Complex of General cargo in the commercial seaport of Ust-Luga (Leningrad region) Group of companies "Novotrans" implements the investment project of construction of the Universal trading terminal "Ust-Luga" (LUGAPORT). The project envisages the creation of marine terminals for grain processing, food goods, as well as General and bulk cargo. Total transshipment volume is planned at the level of 24.3 million tons per year. The first phase of the complex is planned to be operational by the beginning of 2023, the second - by the beginning of 2024 and third place by the end of 2024. The project LUGAPORT included in strategic documents of development of transport infrastructure of Russia.

In June 2019, the Group of companies "Novotrans" became the owner of the stevedoring company OOO "global-Service". In September 2019, the organization changed its name to LLC "Stevedoring company "Novotrans". SK "Novotrans" has the status of a General agent of the FSUE "Rosmorport" carries out the loading and unloading of vessels at the ferry complex in Ust-Luga port, as well as providing warehousing services. The complex provides cargo service between Leningrad and Kaliningrad regions (Ust-Luga–Baltiysk). In 2020 SK "Novotrans" increased the speed of handling grain and bulk goods up to 2 thousand tons per day, investing more than 100 million in specialized equipment. Suppliers from Russia and CIS countries export grain cargoes to Germany, Belgium and other countries.

The group of companies "Novotrans" was founded in 2004. The holding is one of the largest operators of railway rolling stock, Russia and CIS. Freight car fleet - 25 thousand units. The group provides clients with a full range of transport services: transport with our own rolling stock, logistics solutions for companies dispatching. Own repair service provides a full range of services for maintenance of freight cars, integrating 4 high-tech enterprises in the Moscow, Irkutsk, Kemerovo regions and Altai Krai. In 2019, the holding has started the implementation of the investment project on creation of a modern port infrastructure LUGAPORT in the seaport of Ust-Luga (Leningrad region). Holding begins to enter into the stevedoring business. LLC "Stevedoring company "Novotrans" - the General agent of Rosmorport at the auto-railway ferry complex in Ust-Luga port. Complex connect Ust-Luga with Kaliningrad region and ensures transport security of the Russian enclave.