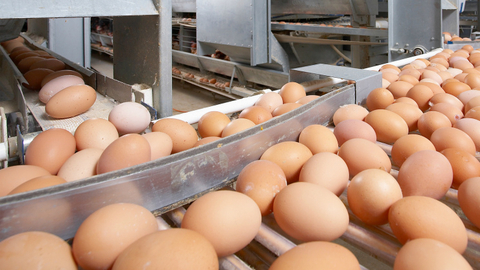 Despite the difficult economic situation of egg poultry farms continue to increase production. According to Rosstat, in the first five months it was released 18.4 billion eggs, which is 0.4% more than in the same period last year. All companies faced with economic difficulties, first and foremost, this is due to the devaluation of the ruble. "The currency component in the production of eggs exceeds 40%. First and foremost we are talking about the higher prices of imported vitamins, vaccines, breeding products, spare parts, equipment", — said "the Agroinvestor" the General Director of the Russian poultry Union Galina Bobyleva. In addition, increased grain prices and soybean meal. In the end, the cost of production of eggs increased by about 20%, she estimates.

The selling price of eggs does not increase and, although given the increase in cost should be adjusted in a big way, is no prerequisite for this, as the purchasing power of consumers is low, continues Bobylev. According to her, the demand for eggs is stable, because it is a socially significant product: great there is no growth, but the fall is not observed.

In January-may the average sales price of shell eggs from producers amounted to 43.1 per dozen against RUB 44 RUB, the company informed. According to Rosstat for June 22, eggs retail cost is 8.9% less than in December last year.

Despite the fact that profitability has declined, none of the poultry is not closed, continues Bobylev. "Poultry meat and egg is the cheapest animal protein, so these products will always be in demand," she said.

Manufacturers confirm the persistence of the demand for eggs. So, the General Director of the poultry farm "sinyavinskaya" Arthur Choldenko said that although the b2b and HoReCa sectors has been declining, thanks to the policy of sales, the company managed not to lose sales and keep them at a high level in retail. Therefore, the company was not required to adjust downward the eggs, on the contrary — for the first five months the growth amounted to 9% compared to the same period of 2019.

Although sale prices fell slightly, the cost of production at "Sinyavinskaya" remained approximately at the same level as last year. "This is due to the fact that we managed to properly build a long-term strategy of cost and sales, so we feel comfortable even in difficult economic conditions," explains Dr. Choldenko.

Poultry factory "Volzhanin" (at the end of last year, she became the country's largest producer of eggs, squeezing in the first place "Sinyavinskaya") also have not noticed the growth of the cost of production. "Because of our own silo, we pre-purchased grain, which will last us until August, and do not depend on the current growth of prices", — says the General Director of the enterprise Lyudmila Kosteva. The price of egg, according to her observations, until recently, was kept at a stable level, although it began to decline. "However, our profitability allows us to earn and grow", — says the Director.

Production volumes of "Volzhanin" this year increased by 12% compared to 2019, however, the remnants of eggs at the poultry farm no — the demand is consistently high. But the demand for deep processing of egg products decreased slightly as HoReCa and b2b segment began to purchase dry and liquid egg products in much smaller volumes, recognizes Kosteva. However, poultry also has no plans to cut production volumes. "We recently received new equipment that will allow us to increase production," shares Kosteva.