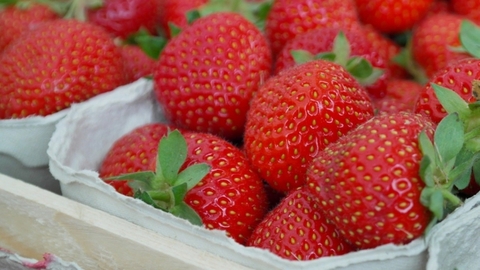 This year gross harvest of berries in Russia will be 10-20% less than in 2019, predicts Berry Union. The harvest was negatively impacted by two factors: unfavorable weather conditions, quarantine restrictions, said "the Agroinvestor" CEO of the Union Irina Koziy. In the southern regions of the country in late April-early may, the plants suffered from the frost and cold weather and heavy rains in the early summer killed a lot of berries: they were amazed by fungal diseases, protection from which in Russia because of the extremely complex and expensive registration procedures, she explains.

Agriculture also faced with a shortage of the workforce: seasonal workers could not enter the country due to the closure of borders in the background COVID-limits. "Recently, the government has developed a solution that allows to organize spot-check individual qualified personnel. Berry is grateful to the Union Ministry of agriculture who connected this issue. However, the season of gathering berries in many regions almost over, and for most businesses this decision late," said the Goat. As a result, according to the Union, this year in the commodity sector will be collected 15-17 thousand tons of berries. In 2019, according to the company "Technology of Growth", the yield was about 19 thousand tons.

However, even collected berries manufacturers are not so easy to sell. In particular, some southern regions could not take berries from the fields, because of the quarantine restrictions had blocked the road. There was also a disruption of markets. In Moscow this year, not consistent work, seasonal outlets for the implementation of berries — informed in the capital there were about 150 each year. "Our Union sent a letter to the mayor of Moscow Sergey Sobyanin with a request to resume the operation of outlets for the sale of berries, but so far no action it taken. This means that a significant part of the harvest of about 500 tonnes — the manufacturers will just disappear, as the berries will not be sold in time", — says the Goat.

Berry Union asks mayor to consider working outlets for the sale of strawberries in July 2020 or to highlight local producers a sufficient number of places for daily trading in a different format, reads the letter, dated June 29, (a copy is in "the Agroinvestor"). This season the farms of the Moscow region and nearby regions completely deprived of the opportunity of direct sale of berries to Muscovites, said in the letter. "The format of the fairs of the day the participants of the berry industry in connection with short sales season, which does not coincide with the cycle for the submission of applications for participation in fairs, daily harvest and the extremely short shelf life products, requiring immediate sale of all harvested crops in one or two days," writes the Union. The producers of berries are unable to recoup the investment in the laying of the plantations and work to care for berry plants, and will be forced to cut production and lay off employees, warn the authors of the letter.

"Now the largest producer of strawberries in Russia is "state Farm Lenin", Moscow region, the company grows more of this fruit than the entire Krasnodar Krai, — tells the General Director of "Growth Technology" Tamara Reshetnikova. — This year, the company reaped a rich harvest of berries, however the authorities of Moscow and Moscow region do not give him the permission to realisation of production, but the berries can be stored for a long time — if not to sell immediately, they'll be ruined". Thus Moscow and the Moscow region is the main region of consumption, because there is higher effective demand, and berries are still the premium product segment, drew attention to it.

According to the Ministry of agriculture and food of the Moscow region since the beginning of the season in the region has collected about 450 tons of strawberries, including 400 t — in "Sovkhoz imeni Lenina". "To buy strawberries directly from the farms picking berries and organized markets in the suburbs and the capital. Prices vary in the range of 350-400 rubles/kg", — said the head of the Ministry Andrei Razin. Last year agricultural enterprises of the region gathered in the open ground more than 1.2 thousand tons of strawberries, this year it is planned to increase indicators.

In General, according to "Technology Growth", the production of berries in Russia is increasing — this year in may-June on the shelves was much more domestic products than in the same period last year. And segment there is room to grow, and it on the production both in open and protected ground. "The potential expansion of production in greenhouses is about 100 kt, in the open — even more", — said Reshetnikov.

In recent years, according to the "Technologies of Growth" in Russia traditionally imports no less than 50 thousand tons of fresh berries, last year the import volume amounted to 59 thousand tons, including 45 tons of strawberries. Second place goes to blueberry — it was brought 5 thousand tons, the share of other berries — currants, raspberries, blackberries — in the total supply volume is even less — 1 to 3 thousand tons, In monetary terms, imports of berries topped $137 million, estimates Reshetnikova. "The bulk of the total imports could replace Russian manufacturers. However, not all of the imported berries in Russia can be grown year-round outdoors, as in other countries, so in the offseason they are often cheaper to import," — said the expert.

According to her, in Russia there are only a few greenhouse plants, growing berries in greenhouses year round. Among them — a new venture "a Taste of Stavropol", which put the first berry in the trading network in April. Also berry greenhouses are large producers of greenhouse vegetables, such as TK "may", Agrokombinat "Moscow", "Agrokultura", "homeland", "Greenhouse", TC "Belorechenskiy", maybe vysokovskiy. However, the allocated power berries don't exceed 0,4-0,6 hectares in each plant.

Also there are manufacturers that grow berries in the autumn tunnel greenhouses in Kabardino-Balkaria, Stavropol region, the Kuban, in the suburbs. Recently, the company "the Dawn", created by the owners of the holding company "AFG national", started to grow berries in the Nizhny Novgorod region under the trademark "Sergach berry." The company manufactures products until September, not year-round, said Reshetnikov.