Wednesday, 08 July 2020
Pork exports have increased 2.5 times
The increase was due to fold increase supplies to Kazakhstan, Mongolia and Vietnam 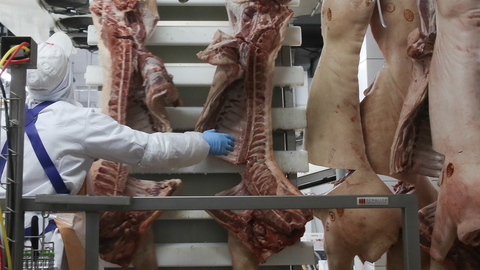 In January-may 2020 physical volume of exports of fresh and frozen pork increased by 2.5 times compared to last year, according to FTS. For the first six months of this year Russia exported about 85 thousand tons of pork products (including countries of EEU), an increase compared to last year is almost 90 percent said "the Agroinvestor" Director General of the National Union of pig producers (NSS) Yuri Kovalev. The growth rate for the first half of 2020 became possible thanks to increase in deliveries to Kazakhstan in 4.8 times, three times more Russian pork products purchased Mongolia and 1.6 times — the Vietnam.

In 2020, the agricultural enterprises, according to preliminary estimates, would produce over 4.7 million tons of pork, which 401 thousand tons or 9% more than in 2019, In 2021, the increase will be 7%, 2022 — 6%, 2023 — 2%. The production increase was planned in advance, and it will last until 2023 at the expense of concessional loans, which until 2018 issued for the development of commodity production explains Kovalyov. Without the development export markets Southeast Asia, further development of the industry is not only unnecessarily risky, but strategically short-sighted, because Russia has achieved-sufficiency ratios for this type of meat in 2018, says NSS.

In January-may the share of exports of foodstuffs and raw materials for their production in the commodity structure amounted to 8.1% (in January-may, 2019 and 5.2%). Compared with the first five months of last year cost and physical volume of supplies increased by 20.8% and 27.9%, respectively, according to the Federal customs service. The export of meat in General increased 2.2 times, poultry — by 1.8 times, butter — by 35%, milk and cream — 21.7%, wheat — by 20.4%, cheese and cottage cheese — by 7.7%.

China and Vietnam in the medium term are the most promising markets for pork exports, not only imports, but also on the level of their domestic prices. And if China is closed for now, Viet Nam has become the main buyer of our pork: there at a high price delivered not only by-products, such as in Hong Kong, but the products in live weight, says Kovalyov. However, the exports to this country is allowed only 10 companies (in the early years there were two of them), but NAC expects that in a short time, another 10 companies will have the right to enter the market of the country. This, according to Kovalev, is the most significant event for the growth of supply in Vietnam. As an active increase in exports due to the opening of new markets began only this year, the company may periodically encounter difficulty when paying, logistics , but Kovalev believes such moments are not so much problems as lessons of growth.

In connection with the achievement of self-sufficiency for pork and the continued growth of production, Russia has sharply increased the internal competition, which wholesale hog prices will gradually decline or at least grow with inflation in the coming years, analysts warn of NSS. Wholesale meat prices also decreased: in 2019 they fell by 8% compared to 2018 in the first half of this year — another 10% from 2019. "Certainly, the margin is reduced, but effective for companies with reasonable credit policy is a new reality, which includes the market. And for inefficient — it's a difficult time, and most likely they will have to leave," added Kovalev. So, according to the calculations of NSS, in the next three to five years in connection with a reduction in wholesale prices can cease to exist not less than 75% small and 25% medium-sized companies with a total annual production of 250 thousand t in live weight.