Thursday, 09 July 2020
IN THE KURSK REGION A SOLEMN CEREMONY OF LAYING OF THE FOUNDATION STONE AT THE CONSTRUCTION SITE OF THE NEW CATTLE-BREEDING COMPLEX OF GK "AGROPROMKOMPLEKTATSIYA"
The event was attended by the Governor of Kursk region R. V. Starovoit and General Manager of group of companies "Agropromkomplektatsiya" S. A. Novikov. 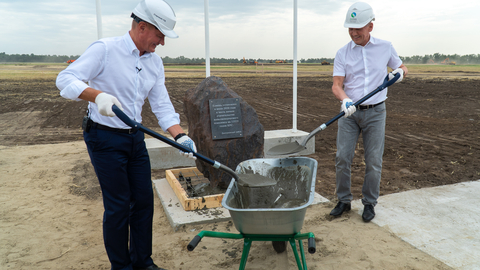 In his welcoming speech the head of the region thanked the S. A. Novikov for the decision to develop dairy farming it the land of the Kursk:

"It is very important and it's nice that Sergei Anatolyevich Novikov and GK "Agropromkomplektatsiya" decided to implement this project here, on our site. Three complexes of cattle will be nearly 100 thousand tons of milk per year. And, of course, very important for us that there will be jobs."

On the implementation of the projects in the same Demetrius district, Kursk region will be more than 400 new jobs. In addition, the Governor thanked the Director General GK "Agropromkomplektatsiya" for the support of Demetrius agricultural College, whose graduates in the future will have the opportunity to find employment in the new facilities of the Group.

In turn, S. A. Novikov noted that the implementation of such ambitious projects are possible only in close cooperation of business, regional and Federal authorities:

"We have experience in the construction and dairy farming. If to speak about projects in Kursk region, in which we began to invest, then we double our milk production. I think that the support from the Ministry of agriculture, the authorities of Kursk region, we receive and our joint work is a guarantee that this time next year we will be cutting the ribbon and see how will be milked our cow."

The group of companies "Agropromkomplektatsiya" is one of the leading in the Russian Federation, vertically integrated agro-industrial associations.

Specialization: swine production and dairy farming and processing and its implementation. The main brands of the Group: "Dmitrogorsky product", "Ismail", "Sincerely yours", "Provence-bakery".