Tuesday, 14 July 2020
Rostselmash has created a center for the development of world-class projects in the field of digitalization APK
Donskoy engineering center Rostselmash (the company is included into Association "Rosspetsmash"), created with the support for the implementation of joint projects in the sphere of digitalization of agriculture and agricultural engineering in the first place, digital design of agricultural machinery of new generation, the calculations of their strength and resources, simulation modeling and creation of digital doubles of promising technology. 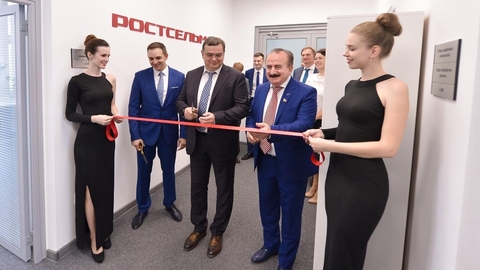 DIEZ, the company provides engineering services outsourcing to industrial enterprises of the region and country using the most modern technologies and software, including SolidWorksPremiumSimulation, ANSYS, EDEM.

To create the don engineering center Rostselmash purchased hardware and software complex of new generation, which is a cluster virtualization complex calculations and control system big data. Computing power and innovative equipment allow us to effectively solve the tasks of modeling and creation of digital doubles of agricultural machinery.

In 2018 in the framework of the signing of the cooperation Agreement the company and DSTU identified areas of strategic development. Implementing these agreements, DGTU has upgraded educational programs for the training of engineers. A laboratory was established for students with the software product SIEMENSNX / Teamcenter.

The Rostselmash company and trained specialists DSTU working with calculation software module NXNastran. At the University by order of the enterprise developed design documentation on the final drive of a forage harvester and the digital test its reliability, modeling of air flows from the air conditioning system in the cabin of agricultural machinery Rostselmash.

Donskoy engineering center of the company will act as a platform for the development of world-class projects in the framework of the southern scientific-educational center "Digital transformation in the agro-industrial complex" (South REC), which is formed with the support of the Government of the Rostov region by a consortium of leading scientific, educational organizations and relevant enterprises of the real sector of economy of the region.

The Rostselmash company is the key partner of the South REC. With the support of the leader of the agricultural machinery of the Russian participants in the South REC pool will be implemented projects for the creation of an ecosystem of digitalization of agriculture in the region. Support University DSTU Governor of Rostov region Vasily Golubev is assigned the role of coordinator of program development southern REC.

-The company is willing to work together with DGTU to the creation of an ecosystem of the introduction of digital innovation on the basis of the don of the engineering center "Rostselmash". We are actively working on a number of projects and we see the prospects for reaching an international level of results of their implementation, - said the General Director of open company "KZ "Rostselmash" Valery Maltsev.

The main mission of South ERC is the creation of a pilot center for digital agriculture in our country, element will be the don engineering center Rostselmash. South of the REC is actually a "sandbox" for the development of innovations and scientific developments of the world level in the agricultural sector. I am sure that joint efforts of the Government of the Rostov region, science, higher education and such major and reliable partners Rostselmash we will be able to develop the most advanced projects and prepare a competitive program South of the REC, which will present to the Government of the Russian Federation, the Rostov region Governor Vasily Golubev, said the DSTU rector Besarion Meskhi Cohaesio.

The opening of the center will take place on July 14 at 11:00 at the don state technical University.