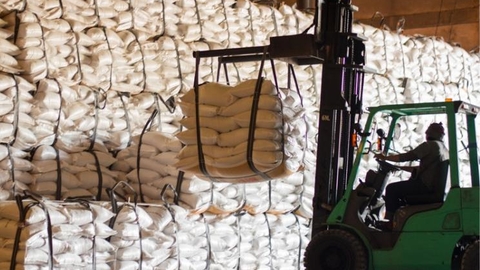 In season 2019/20 Russia will take out nearly 1.8 million tons of sugar (hereinafter in this paragraph — in raw equivalent; the conversion factor to white sugar — 0,92%) and takes seventh place in the world for exports, according to RBC with reference to the presentation of the International sugar organization. Our country is ahead of Cuba (1 million tons) and the EU (1.1 MT), the leader of this year will be Brazil (24 million tonnes). Until now, Russia has never been among the largest exporters in the season 2018/19 she was only in the second ten.

Soyuzrossakhar and confirmed RBC that in the previous season (early August to end of July), Russian companies shipped abroad 277 thousand tonnes of sugar in it, according to the latest data of July — nearly 1.3 million tonnes. According to the Institute for agricultural market studies (IKAR), in season 2019/20 Russia will update its record net exports (exports less imports, mainly from Belarus) he will be around 1.2 million tonnes Since October of last year the net exports of sugar is kept at more than 50 thousand t in a month. In April, the export exceeded 150 thousand t Center industry expertise Rosselkhozbank calls sugar one of the drivers of growth of the AgroExport. So, for the first six months of 2020, supply of sugar abroad increased 17 times, from $13 million to $218 million.

Leading expert of IKAR Evgeniy Ivanov says that Russia may repeat the record sugar exports in the case of substantial overproduction. For example, as in the 2019/20 year — about 2 million tons of it was unnecessary. However, in the 2020/21 year's production is expected at the level of consumption (about 6 million tons), and export will remain due to remaining stocks of the past five years.

To increase the volume of shipments of sugar will be extremely difficult, if not to solve old problems, Ivanov continues. The main reason is the poor logistics of sea export. "On the Baltic and Black seas in Russia there is no suitable infrastructure for the export of containers. Even if you have a product and not only sugar, to export its containers is very difficult, expensive, and bandwidth [ports] small. That is cheap and millions of tons to export their products to Russia is not able to", — he commented "the Agroinvestor".

Each importing country has its own requirements for imported merchandise: somewhere requires a special certification, labelling, somewhere-the information in the state language, etc. "That is necessary to do hard and long work to go to another country," adds Ivanov. Now the most capacious and promising market is in China, it is one of the world's largest importers of sugar, but the country has a tariff quota for the importation of approximately 2 million tons But this quota yet.

According to Ivanov, to get into it, but it should act the Ministry of agriculture and other agencies who have been working in this direction. "And if this case moves forward, we will be able to expand the scope and geography of exports," — said Ivanov. In addition, to transport sugar to the China railway, the most convenient way — via Khorgos (Kazakhstan) to Urumqi. This shipping method has important advantages of speed and cost of delivery, he concludes.

The production of solid beet sugar in volumes far exceeding domestic demand, forcing Russian producers to find new markets, analysts say the Bank, the head of the Center industry expertise Rosselkhozbank Andrew Dalnov. The Ministry of agriculture has previously held that in terms of overproduction to stimulate the export of the sugar in the EEU countries and other foreign markets. In April, Prime Minister Mikhail Mishustin signed a decreethat allowed sugar producers to enter into agreements for joint export outside the countries of the EEU, so the company was able to generate a large batch and to optimize logistics costs.