Tuesday, 21 August 2018
Kamchatka fishermen have warned about the threat of loss of populations of sockeye salmon.
Mass salmon spawning on the East coast of Kamchatka created a real danger of overflow of the spawning grounds, said in a statement "of the Association of fishermen of the Ust-Kamchatsky district." 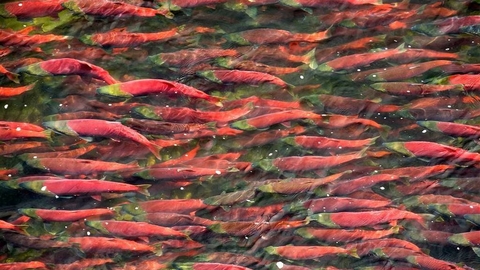 The fishermen questioned the accuracy of the record of the number who have come for spawning into the rivers of the Eastern coast of the Peninsula fish, which were conducted by specialists of the Kamchatka research Institute of fisheries and Oceanography (Kamchatka fisheries Institute).

"More than half of the fishing season — 42 of 77 days — the fishermen were forced to stand. As a result of the findings of the Kamchatka fisheries Institute about the lack of fish in the rivers in the area has taken an unprecedented decision for the first time in the midst of fishing season the fishing for salmon in July was closed for 21 days in a row. The inspectors non-profit "Association for the protection of aquatic biological resources" permanently fix mass approaches of salmon and the lack of account sections of the scientific staff of Kamchatka fisheries Institute which would certify that fact and to recommend that the special Commission to increase the intensity of the fishery", — said the Vice-President of the Association of Roman Kiriyenko.

He added that since August, the inspectors of the "Association for the protection of the FBG" misleading as downstream channels from the lake Azabachye ("the hospital" sockeye of the Kamchatka river) swims a significant number of dead fish, which may indicate overflow of spawning grounds.

"And this is fraught with erosion of the population of valuable salmon. The same data are received by results of independent surveys," — said Kiriyenko, noting that the actions of the employees of Kamchatka fisheries Institute can cause not only environmental but also economic damage.

In turn, the Kamchatka fisheries Institute with the findings of the fishermen do not agree. Experts believe the shortage of sockeye salmon in the East.

"The number of sockeye salmon missed on the spawning grounds in the lake Azabachye enough. There has been a shortage of sockeye salmon in this pond," — told RIA Novosti the representative of the press service of the Institute.

The Association of fishermen Ust-Kamchatsky district intend to seek a legal assessment of actions of employees of the Kamchatka fisheries Institute. Now the fishermen gather the necessary materials, including photos and videos.

Ust-Kamchatsky district of the Kamchatka region is one of the fishing areas of the Peninsula. Salmon fishing season starts here in early summer and continues for several months. Located here Azabachye lake is the largest spawning-feeding pond Asian sockeye in the basin of the Kamchatka river. Here fattens up to 70 percent of all juveniles.