Monday, 01 June 2020
According to forecasts of the center of industry expertise Rosselkhozbank, Apple production in Russia to 2024 will increase 2 times and will exceed 1.2 million tons
Center industry expertise Rosselkhozbank analyzed the potential of the Russian market of apples. Taking into account the dynamics of the output of intensive gardens design capacity, total production of marketable apples in 2024 could reach 1.2 million tons, of which 1.04 million tons will give the new gardens planted in the period from 2015 to 2019. 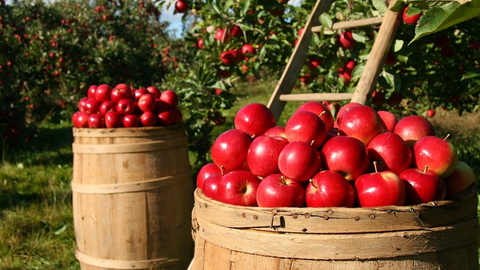 In the Russian production of apples is structural adjustment: withdrawal from the market of traditional orchards with low marketability and yield, and their replacement by intensive orchards. According to the Ministry of agriculture of Russia, 2015-2019 was planted of 62.3 thousand hectares of intensive orchards.

In Russia, the trend continues to restore the capacity of the market of apples. In 2019, the volume of the Russian market of commercial Apple (import plus self-production without Le and without regard for the fruits deep processing) amounted to 1.4 million tons. For the period 2015-2019 market grew by 23.6%, but the current market capacity is 12% less than in 2013.

Rosstat, Federal customs service and the Ministry of agriculture has estimated that in case of increase in 2024 market capacity to 1.74 million tons, the share of imports will decline from the current 55% to 36%. Assessment of the agricultural Bank, to complete the import substitution will need to be further planted from 16 thousand to 63 thousand ha (depending on the level of intensification of the garden) Apple orchards. Thus, in 2023 Russia can be self-sufficient in apples, provided a steady flow of investment into the sector, including through the provision of subsidies from Federal budget for compensation of investors of the capital expenditure on the construction and modernization of agro-industrial facilities (CAPEX).


"Today, Russia is the largest country-importer of apples: our share in world trade of 13%. The Russian market is essential for Serbia, Moldova and Azerbaijan. Points of growth of domestic production of apples – that is import substitution and production of deep-processed products: jam, jellies, concentrate, and the like. In the case of Russia's refusal of import competition in the remaining markets will increase. With regard to the export of products from Russia, it is limited, and available primarily in Kazakhstan, LC, DNI, Gulf countries and North Africa", — said Andrey Dalnov, head of industry expertise Center of Rosselkhozbank.

Russian manufacturers need to focus on the domestic market. Thus, the level of consumption of commodity of apples to Russia – 9 kg per person per year, which is 30% less than USA and EU countries (12 kg / person/year). In the case of growth of per capita consumption to the level of comparable countries, the capacity of the Russian market of apples can be predicted to 1.74 million tons.

JSC "Russian agricultural Bank" – the basis of national credit and financial service system of agroindustrial complex of Russia. The Bank was founded in 2000 and today is a key lender to the agriculture of the country, is among the largest and most stable banks in the country in terms of assets and capital, as well as the leaders of a reliability rating of the largest Russian banks.