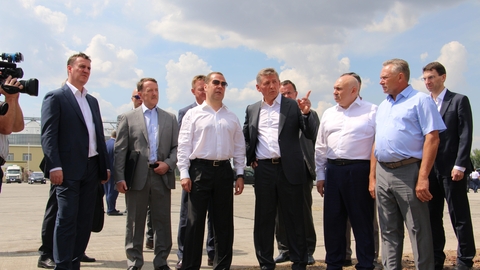 Prime Minister Dmitry Medvedev agro-industrial enterprise Group, presented to the General Director GK "Agropromkomplektatsiya" Sergey Novikov. The Prime Minister got acquainted with the work of a new feed mill Groups, and modern agricultural technology in the field and talked to the mechanics of plant units of the Group – OOO "APK-Chernozemye". Then, Dmitry Medvedev was shown a full range of production processes at OOO "Kursk meat processing plant" - the flagship of innovative enterprise Group included the three leaders in Europe in terms of technological equipment. Advanced solutions, modern production lines and robotic equipment, as well as the Group's products received a high rating of the Prime Minister and other officials.

In particular, the General Director of Group of companies "Agropromkomplektatsiya" in his speech at the meeting noted the significant growth of state support of agrarian sector. "Russia is becoming entirely self-sufficient in pork, and now the question arises about the further development of the pig industry, - said Sergey Novikov. - The government of the Russian Federation, the Ministry of agriculture of Russia and Rosselkhoznadzor carried out a great job of domestic products in foreign markets, but we need to consolidate these offices in the complex issues related to the veterinary safety of the country for rapid access to new markets with a significant increase in the volume of export supplies of Russian manufacturers".