Friday, 31 January 2020
Onf will continue to work in the flood-affected areas together with the Irkutsk authorities
Deputy head of the Executive Committee of the popular front Igor Kostyukevich told the acting Governor of the Irkutsk region Igor Kobzev about the problems in the settlements Tulun district. The event was held in the regional government in format of video conference with the heads of the affected areas. 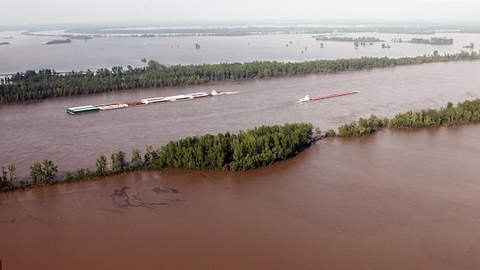 "The last few days we worked in Tulunskiy rayon. Problems for residents remain, although we have done a lot. In some localities the application taking only those whose homes are on overhaul. Because many certified yet are forced to live in emergency housing. In the administration building of the village Burgun we saw humanitarian aid, lying in the hallway. And the head of the village administration Gadaley all the complaints of residents about the flooding put the folder back in December of last year and does not passed", – stressed Kastukevich.

Kobzev instructed to deal in situations that were announced.

"Given the lower temperatures will take on special control issues of providing citizens with firewood. With regard to humanitarian aid, it needs to be targeted. In addition, we enter into an active phase of construction of houses and social facilities. Therefore, it is more important to public control," said Kobzev.

People worried about the future of settlements, because many homes are being demolished. In the village of Pabaiga only a few houses in the village of Arshan from 114 after settlement will be no more than 40 houses.

"To meet and talk with people in the territories, and not in the offices. We suggest the authorities of the Irkutsk region to join the onf, and together to travel to distant villages and towns in the flooded area quickly to remove most of the concerns of residents," said Kastukevich.

"I am grateful to Igor and to all representatives of the popular front for the support for work with residents, providing information. Once again, we must work as a team to engage in direct dialogue with people. We have 115 affected communities. They need to overtake," concluded Kobzev.

Joint trips and onf representatives of regional authorities in the settlements are planned in the near future.

Russian popular front (onf) is a social movement, created in may 2011 on the initiative of Russian President Vladimir Putin, which combines active and concerned residents. The leader of the movement is Vladimir Putin. The main objectives of the onf – the control over execution of decrees and orders of the President, the fight against corruption and wasteful, ineffective spending of public funds, improving the quality of life and protect the rights of citizens.