Tuesday, 09 April 2019
CLAAS HAS OPENED A NEW TEST CENTER
The head company CLAAS in Harsewinkel, a solemn ceremony of opening a new Test center for testing of agricultural machinery. The project invested 15 million euros, of which 3.2 million Euro was allocated for the purchase of equipment for conducting tests of the new machines. 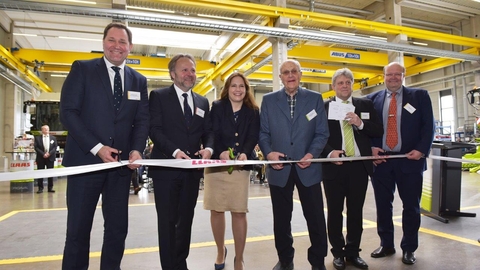 At the official opening Chairman of the Supervisory Board of the CLAAS Group Katrina Klaas-Mulhauser said: "In may of 2017, we laid the first stone in the Foundation of the building, and it took just 22 months to build and put into operation. We thank the staff of CLAAS, who were involved in the project, as well as all our contractors involved in the construction."

Test center in Harsewinkel CLAAS will help to accelerate the development of new models of grain-, forage harvesters and tractors. For the simulation of various natural climatic conditions and their impact on the equipment during its operation in various countries and operates 13 installations, and tests can be performed 24/7.

The largest and most complex in the implemented design solution, installation is stand for fatigue testing of the headers width to 12 m. Only the Foundation on which suspension set stand, weighs 600 tons. A unique installation in Europe there.

Also, the Test facility works and laboratory testing of all electronics machines. Here it is possible to test the interaction of systems help the driver with all the components. Thus, only a combine harvester has a 30 control units and on each machine in a fully automatic mode you can now run up to 50 thousand test operations.

It should be noted that after successful completion of all laboratory tests CLAAS will be held a mandatory testing in real field conditions. It is here that finally confirmed the reliability of machinery CLAAS.

CLAAS was founded in 1913 as a family business (www.claas.com), and she is now one of the world's leading manufacturers of agricultural machinery. The company is headquartered in the Westphalian town of Harsewinkel is the European market leader in combine harvesters. Global leadership CLAAS reserves and in the field of self-propelled forage harvesters. Leading positions on the world market of agricultural machinery owned by the company CLAAS in the field of tractors, agricultural balers and forage equipment. The company assortment includes the most modern information technology in the field of agriculture. Today around the world CLAAS has approximately 11,000 employees. Turnover for the year 2018 have to 3.89 billion euros.

In Russia the company works since 1992. In 2003 it started production of combine harvesters in Russia. Currently, the plant in Krasnodar produces seven models of combine harvesters and eight models of tractors. In 2015, open the second phase of the plant. Marketing techniques arranged through the sales company OOO CLAAS Vostok in Moscow with the participation of 19 partner companies, which operate on the territory of Russia.