Thursday, 16 May 2019
"It is necessary to form a new image of the village – territory of development" - Julia Ogloblina at the media Forum BIP in Sochi
Media forum of independent regional and local media "Truth and justice" gathered more than five hundred participants: journalists and the winners of the contest for journalists, government officials, public figures and experts. 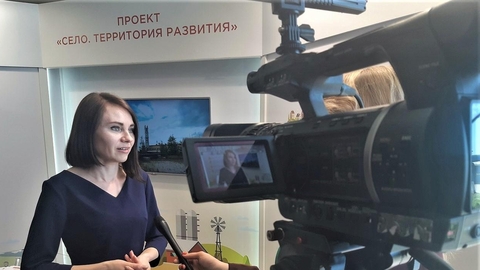 Russian Union of rural youth arrived at the forum to present the project "the Village. The territory of development". May 15, Chairman of RSSM Julia Ogloblina made a presentation of the project to journalists.

"The goal of the project will be the formation of new approaches to rural development through the involvement of local communities" said Julia. In the framework of the project experts, the onf intends to monitor the implementation of the state program of development of rural territories, and all national projects which affect the quality of life in rural areas. They must be implemented comprehensively, and the result should be new jobs with decent wages, quality health care, modern educational facilities, high-speed Internet and much more, which is the norm for citizens and inaccessible to the vast majority of rural residents.

As the project coordinator Julia Ogloblina presented to the participants of the meeting the objectives of the project "the Village. The territory of development", including:

- monitoring the implementation of the state program of complex development of rural territories and national projects that affect the improvement of the quality of life in rural areas;

- training of the rural population integrated development of rural areas;

- preparation of annual public report on the quality of life in rural areas;

For two years it is planned to involve in the project not less than 5 thousand activists. "Only together can we break the stereotype of a dying village and shape a new image of the village – site development!" - said Julia Ogloblina.

The relevance and importance of the project "the Village. The territory of development," said Elena Sanaeva, co-Chairman of the Central headquarters of the popular front in the discussion.

The forum discussed other important projects in which RSSM takes an active part. So, the meeting with the co-chairs of the onf, the President of Institute of emergency children's surgery and traumatology Leonid Roshal said that in cooperation with the Russian Union of rural youth, monitoring of obstetric centres, construction of the national project "Health". General Director of JSC "KAMAZ" Sergey Kogogin told about the monitoring of the availability of grants to beginning farmers. This initiative was also proposed by the Russian Union of rural youth and is being implemented together with AKKOR.

Within two working days of the stand of the project "Village. The territory of development", where activists spoke with journalists, discussed the most pressing concerns of the villagers. Many forum participants expressed a desire to become project participants.