Wednesday, 25 September 2019
French farmers came out to protest and burn fires
Last night throughout France the protests of local farmers under the slogan "Fires of wrath". Farmers burn fires along roads and at intersections: they expressed dissatisfaction with the ban on the use of pesticides. 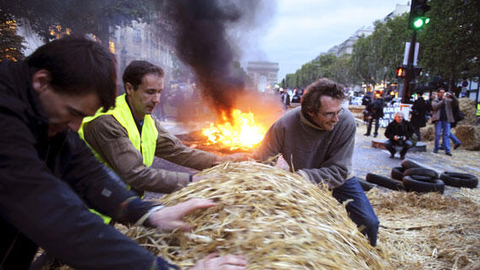 According to local media, large bonfires lit in the capital region Ile-de-France, the departments of Eson and Upper Garonne, as well as in Calais.

Such a strong reaction from farmers has caused the recently published draft law establishing agricultural zones, which prohibited the use of pesticides. In the case of a law from the beginning of 2020, these zones will appear near human settlements. According to French farmers, such limitations significantly reduce the area of their farmland, and adversely affect the General harvest.

— The bill became a drop of water that broke the patience. We are now almost constantly subjected to in society is criticized for its methods of work that complicates and without that our hard work, stressed in an interview with radio station France Info, the Secretary General of one of the district offices of the Union Jeunes Agriculteurs ("Young farmers") Amandine muret-Begen. In her opinion, such a bill can only make people do not know anything about agriculture.

Planned protests across France will last until the end of the week.