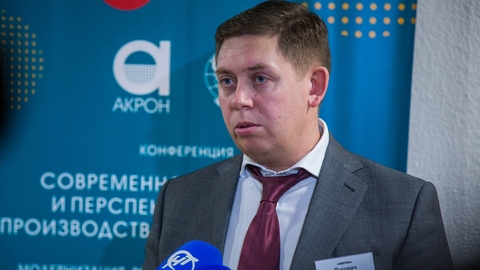 The forum was organized by JSC "Akron" and the international scientific information company "infokhim". The conference was attended by over 100 representatives of chemical enterprises and organizations of Russia, CIS countries, near and far abroad, including EuroChem, PhosAgro, URALCHEM, "fertilizers."

The conference discussed the prospects of production of nitric acid, the introduction of industrial innovation and energy efficiency. The delegates got acquainted with the decisions research institutes, engineering companies, equipment manufacturers and chemical products. This conference was a valuable venue for exchange of experience and interaction.

First Deputy Executive Director – chief engineer Michael Jaskiewicz PJSC "Akron", said: "the Topics discussed at the conference is very relevant to us. Is steadily increasing production of key products, including by increasing the capacity of production of nitric acid, as raw materials for the production of mineral fertilizers. By the end of 2019, we plan to put the third new unit of nitric acid with total capacity of 135 thousand tons per year, which will create a Foundation for further growth of production indicators. This conference contributes to the establishment of the maximum number of useful contacts and discuss opportunities for further cooperation."

The first nitric acid plant was commissioned at the site of the Group "Akron" in Veliky Novgorod in 70th years of the twentieth century. In 2019 put into operation two new unit of nitric acid with total capacity of 270 thousand tons per year. At the end of the year is expected to launch another unit under construction at the moment. The new units are high-tech and modern production facilities. With their launch of the JSC "Akron" will be released on best indicators for consumption of ammonia in these industries in the CIS countries.

The total capacity of the nitric acid plant of Acron Group, after the start of the third unit in the Novgorod area, by the end of 2019 is expected to reach 2.5 million tons, which is 16% above the level at the end of last year.