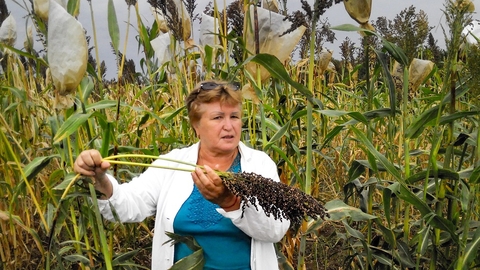 "Our varieties in any area and in any weather conditions should give a guaranteed harvest. In addition, now, for example, is the question of the creation of varieties of sweet sorghum with high sugar content in the juice of the stems. This alternative culture for the production of liquid sugar because of the sweet sorghum juice is not kristallizuetsya due to the large amount of glucose and fructose. This product can be used in the food industry, in pharmaceuticals and for the production of bioethanol. For starch you can use varieties of grain sorghum that contain 68-73% starch", – quotes the press service of the University of associate Professor of the Department of plant agriculture technology Academy of the Crimean Federal University Love Boldyrev.

According to her, as forage crops are of great interest Sudan grass and sorghum-sudskoye hybrids.

"Corn yields an average of 400 centners of green mass per unit area once a year. Sorghum crops can be removed 2-3 mowing. We can get 150-200 centners of a crop, but a few times a year. Culture can be used as green fodder or hay," – said Boldyrev Love.

Scientists of the Crimean Federal University are working with sorghum in different fields: grain, sugar, broomcorn, Sudan grass, sorghum-sudakovym hybrids. Before the new variety falls on the state, its comprehensive study in the University for three and sometimes six years in preliminary and competitive tests.

"On-site Academy has a skilled field where every year we are laying breeding site with an area of four hectares. There, we conduct breeding experiments and variety trials, comparing new varieties with existing ones. Every year we create approximately 300 different hybrids, and the total number of test samples reaches 2000. In addition, we are engaged in seed multiplication of cultivars for their implementation" – said Boldyrev.

According to her, the use of sorghum is economically profitable, since the norm of sowing is small – only five kilos of seeds per hectare. The cost of one kilo of seeds of the elite is from 60 to 130 rubles depending on the variety.