Tuesday, 09 July 2019
Chinese scientists came to Space for the exchange of experience in breeding of grain
New varieties of wheat, barley, rye, oats and triticale will be created in the framework of Russian-Chinese cooperation 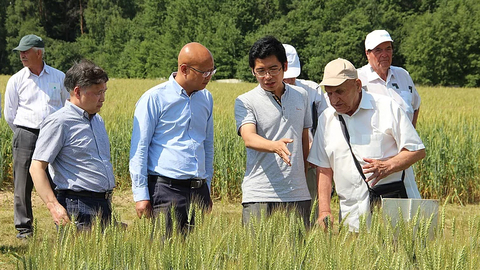 "At the meeting with their Chinese colleagues discussed issues of exchange of scientific experience in the field of breeding winter and spring wheat, winter rye, winter triticale, spring barley and oats, as well as the development of technologies of their cultivation," said Andrei Razin.

The Chinese delegation was represented by the Director of the Institute Zhang Huihan, Professor Liu Balun, a researcher Shen Yihu and assistant Chao Tung.

"Our top scientists and plant breeders had demonstrated at the suburban experimental field of the best achievements in the field of selection of grain crops, promising varieties and lines of winter soft wheat with high baking qualities of grain," - said Andrey Razin.

Following the talks was signed Russian-Chinese agreement on cooperation in the field of agricultural science and technology.

According to the Minister, the agreement also provides for the transfer of each other to use for breeding purposes is not less than 200 varieties of grain, conducting environmental tests of introduced varieties of crops in Qinghai province and in the Central region of Russia.

"Also, following the meeting, it is planned exchange of experience in the cultivation of crops, exchange of experts, scientists and trainees in research, lectures and seminars on topics of mutual interest, exchange of scientific literature and information," - said Andrey Razin.

Последние новости
17:03 The Ministry of agriculture of the Russian Federation will simplify the new system of state support of agriculture taking into account the observations of the regions
16:00 Freight report, week 7 2020
15:07 CLAAS INVESTIGATES THE POSSIBILITY OF USING 3D PRINTING TO MANUFACTURE PARTS
14:01 Export prices for wheat should not wait
13:09 AGROSILA moves to the third stage of digitalization own productions
12:03 OOO "Al" - the new dealer equipment brands Case IH and New Holland Agriculture in the Republic of Tatarstan
11:07 JCB introduced at the British Embassy solutions for the agricultural sector
10:09 Dmitry Patrushev held a meeting with the regions on preparation for spring field work
09:06 Stavropol mineral water recognized the best in Russia
08:00 The raw milk prices this year could rise by 10%
17:06 Group "PRODO" took part in "Prodexpo–2020"
16:05 The Ministry of agriculture was instructed to consider the turnover of GMO products
15:08 "Center Agrobaltika" and the Russian agricultural Bank will jointly develop price indexes
14:03 Unattractive village. Housing in the countryside will not save the village from extinction
13:09 Krasnokamsky RMZ has implemented a large consignment of agricultural machinery
All news