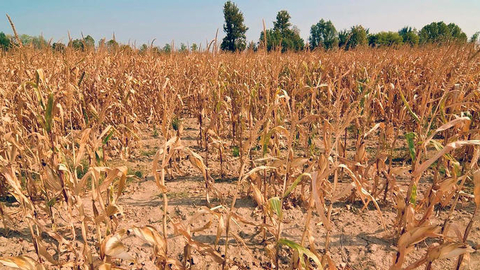 The world must be prepared for "unprecedented" upheaval of the cultural production which is the staple food in many countries, say climate scientists in an article published in the journal Science Advances.

They believe that even if the world manages to limit warming to 2 degrees Celsius, the negative effects will still be doubled in the period between 2041 and 2070 years, forcing farmers to adapt by making more efficient use of water and changing the schedule of planting.

"The increase in the frequency and magnitude of adverse weather phenomena and the associated upheaval will be unprecedented," the article says.

By mid-century Africa will be the most affected region, told Reuters one of the authors of the article Peter Havlik.

According to Havlica, Africa is not a major producer of wheat, but this crop provides 14% of calories consumed by the population of the continent, and this figure is projected to double by 2050.

According to the Food and agricultural organization of the United Nations (FAO), wheat, a key ingredient in everyday foods such as bread, noodles and cereals, provide almost one fifth of the calories consumed by mankind throughout the world.

It is grown in areas more than any other commercial culture, and its global export value of nearly $ 50 billion, according to the Agency.

According to FAO projections, by 2050 the global demand for cereals, including wheat, will increase by 43%, mainly in developing countries.

If these countries will not be able to successfully increase wheat production, they are dependent on imports, the article says.

"These events can increase food insecurity and, as a consequence, political instability and migration."